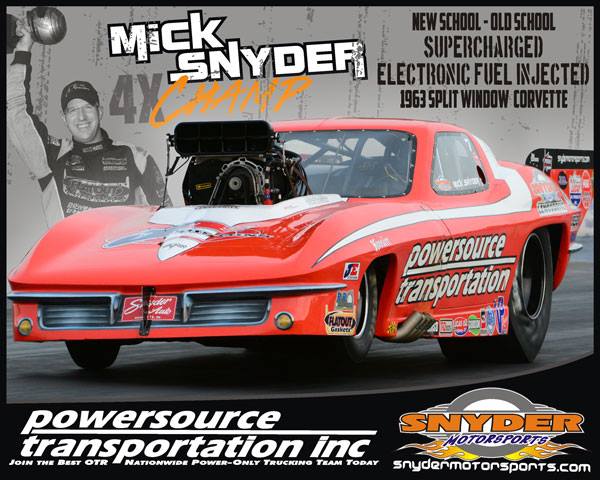 PITTSBORO, N.C. (August 14, 2015): Champion racer Mick Snyder has been sidelined thus far for the 2015 PDRA season while waiting on a new ‘68 Camaro to be completed. Snyder had big plans for his new whip, including a first-of-its-kind supercharger/electronic fuel injection combination. When it became apparent the Camaro wasn’t going to be completed for the majority of the season, Snyder went about switching over his tried-and-true “Orange Menace” Powersource Transportation Corvette to test his innovative combination in Top Sportsman. 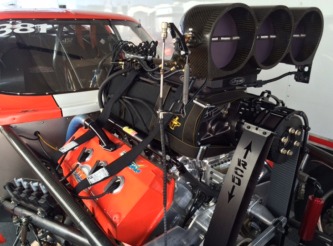 “We put a roots blower on it and changed everything over to ComSyncEFI,” Snyder explained. “I wanted to try this because nobody’s ever done it before and it looked like something exciting. It took me three months to talk Dad into doing it. Once I got him talked into it, we got involved with Ryan Micke and made it happen.

“It’s pretty amazing what it can do. It actually simplifies the whole thing. Before you had three different systems that run the motor. Now it’s all on one computer. You want to change something you just make a few mouse clicks and type a few numbers, download it and go make a pass.”

Snyder has made a handful of passes already, including a number one qualifying effort at a recent NHRA divisional event. So far the combination has posted a best time of 6.322 at 222.16 MPH. The team plans to make their PDRA Top Sportsman debut at the upcoming Memphis Drags, August 20-22 at Memphis International Raceway.

“Once I get this figured out it should be fast. Right now it has more throttle response than what I’m used to, but it’s been awhile since I had a roots blower, too. It definitely shows promise. It’ll take a little bit, but we’ll get it figured out. It’s totally different than what we’ve had before. It’s the same car and everything else, but it weighs 300 extra pounds.”

Snyder Motorsports has been forging new paths in racing since they began in 2004. Their parts supply business, which offers customers a wide range of innovative parts, is soon to also carry EFI systems. “I haven’t had this much fun in a long time,” Snyder added. “I get bored pretty easy. It seems like every five years we have to change and try something new. This way we get to learn more stuff for our customers.”

Snyder gets help with his Powersource Transportation Corvette from his team which is a full family operation including his father and mother, Larry and Bev snyder, his wife Lindsay and their three children, Cam Brady, and Scotty Vandenburg. He is also backed by a group of quality sponsors which include Lencodrive Racing Transmissions, ComSyncEFI, JE Pistons, NGK Spark Plugs, Lucas Oil, Coan Converters, Flatout Gaskets, R & R Racing Products, VED Hemi Head, Aeromotive, VP Racing Fuels, Snyder Auto, Safety Kleen and Long Printing. “I want to thank Barb Bakos, the new president of Powersource Transportation, for continuing to back us as we try this new venture,” Snyder noted specifically. “I could not do this without their support. They are a great company and we’re proud to be aligned with them. I also appreciate Jason and Mitchell [Scruggs, PDRA owners] letting me keep the Corvette and change it over to this new deal. I am grateful for their friendship and their generosity. They are great people!

“This new deal is pretty exciting, and it could change the way we all tune these blower cars,” Snyder emphasized. “It’s still in its infant stage but has some great potential. Should be exciting to see where it all goes.”

Watch Mick Snyder and the full range of PDRA machines at the Memphis Drags, August 20-22 via the Motor Mania Live Feed or visit www.pdra660.com for discount tickets.

For more on Snyder Motorsports, visit them at www.snydermotorsports.com