MILLVILLE, N.J. (May 28, 2016) – Parker Kligerman pulled off the perfect scorecard Saturday afternoon at New Jersey Motorsports Park (NJMP), capped off with a big win in the Twilight 150 presented by Unique Pretzels.

Kligerman, in the No. 22 Cunningham Motorsports Dodge, was fastest in both practice sessions, won the Menards Pole presented by Ansell and earned his 10th career ARCA Racing Series presented by Menards victory, leading 56 of 67 laps en route to the winner’s circle. 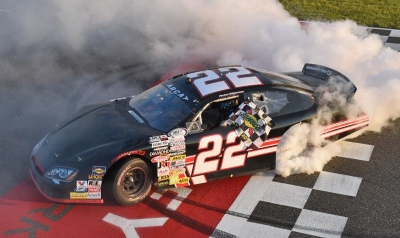 “I’m on cloud nine,” Kligerman said. “This has been a banner day in my life and in my career. It’s been such a long drought for me…it feels so good to get back to victory lane. I feel especially good for Cunningham Motorsports. I wouldn’t be anywhere in this business without the Cunningham organization. They believed in me when no one else did. This win’s for them. I can’t thank car owners Kerry Scherer and Briggs Cunningham enough for this opportunity.”

“I live three hours away…this is my home track. I love this place…love road course racing. I made my first ARCA start here. This truly is a wonderful day for me, personally.” 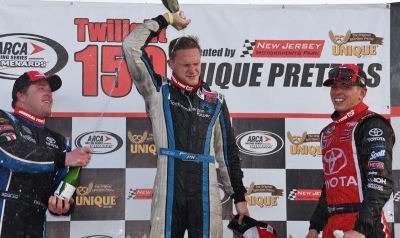 Kligerman gave up the lead just three times for 11 laps. Outside of that, the Westport, Connecticut driver was able to pull away as necessary throughout the 150-mile race before Tom Hessert took a run at the eventual winner late in the going. Hessert chopped two seconds off Kligerman’s four-second lead, finishing second in the No. 25 Cherry Hill Classic Cars Toyota.

“Fortunately, we had a really good race car,” Hessert said. “I felt like we were running down Parker on fresher tires…just ran out of time. All in all, a really good day for Venturini Motorsports. The team has worked really hard over the last two weeks…I’m just proud to bring them home a good finish.”

Hessert battled back from a variety of issues all day, including an off-road excursion in practice that set the team back. As a result, Hessert’s team missed the “in-line” time for qualifying and had to start at the rear of the field.

“This Venturini team battled hard all day. We had a throttle issue early on and then I ran us off track in turn one in practice. We battled hard for this one…I’m calling this a great day.”

Dalton Sargeant, in the No. 55 Toyota Racing Development-Windows 10 Toyota, finished third, fighting hard for every inch in his ARCA road course debut. Sargeant drove his car up to second inside of 10 laps remaining, but fell back to third in the end.

“I’m really pleased with everything overall,” Sargeant said. “Thanks to everyone at Venturini Motorsports. The main thing I learned today was to make as few mistakes as possible. Overall, it was a great learning day for me.”

Sargeant got off course early in the race, and had to battle back from a lap down.

“I burned my stuff up so bad getting back to the front. I feel like we fell off a ledge late in the going…slipping and sliding all over the place. If we could have gotten a late-race caution to let everything cool back, we might have been able to take a better run at it. I’m thankful…every week it gets better and better. It was a great day for Venturini Motorsports.”

Chase Briscoe finished fourth in his ARCA road course debut in the No. 77 Big Tine Dodge for Cunningham. David Levine, making his first ARCA start of the season, finished fifth in the No. 98 Mason Mitchell Motorsports Ford.

Rookie Christopher Bell was in contention to challenge for the win late in the going before he got off-track on the final restart. Bell was running second in the No. 15 JBL Toyota when he and Josh Williams made contact in turn one. Williams motored on while Bell spun off course. Bell was able to get going again, but not before losing several positions.

Williams, who led one lap, hung on to finish sixth in the No. 6 Southwest Florida Cable Construction Chevrolet. Kyle Weatherman finished seventh in the No. 58 St. Charles Glass Ford. Matt Kurzejewski, after leading three laps, finished eighth in the No. 52 Ansell-Menards Chevrolet. Steve Minghenelli finished ninth in the No. 24 Dylan’s RV Center Ford. Bell battled back to finish 10th.

Despite dominating the race, Kligerman said his win was in no way an easy feat. Hessert was clearly catching Kligerman over the final eight laps.

“It wasn’t easy out there at all today,” Kligerman added. “It was so hot inside the car. We went nearly 40 laps on that last set of tires. The General Tire held up well all day, but I know Tom (Hessert) had fresher tires. I wasn’t holding back. I was not conserving anything. We were going as hard as we could all day.”

Four cautions for 24 laps slowed the average speed of the race to 72.261 mph. The race took two hours and five minutes to complete.

The ARCA Racing Series presented by Menards travels next to Pocono Raceway for the General Tire #AnywhereIsPossible 200 Friday, June 3, live on FS1. Prior to the race, ARCA is sanctioning an open test on the 2.5-mile Pocono triangle Tuesday, May 31. Several composite body cars are expected to participate in the open test.