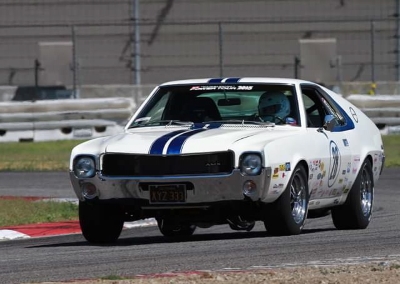 It’s not every day you run across a bona fide American Motors race warrior tucked away in a barn or shed. That’s what Karen Salvaggio found when she bought a tired 1969 AMX that was road raced back in the 1960s and early 1970s. Karen assembled a crack team of female hot rodders to restore the AMX, and over 29 women eventually contributed to the restoration, dubbed Project Valkyrie. You can read the story over at our OnAllCylinders blog.

Summit Racing now offers Project Valkyrie Parts Combos for AMC fans that want a blueprint for building a hot AMX, or to just see what goes into one.

Summit Racing now offers Project Valkyrie Parts Combos for AMC fans that want a blueprint for building a hot AMX, or to just see what goes into one. Road racer Karen Salvaggio assembled a crack team of female hot rodders to restore a 1969 AMC AMX and over 29 women eventually contributed to the restoration, dubbed Project Valkyrie.

Engine Combo
The AMX’s 390 V8 was bored and stroked to 401 cubic inches and fitted with Edelbrock Performer RPM cylinder heads, a Torker II intake manifold, and a 750 cfm Performer carburetor.  The oiling system is all Milodon, and a Be Cool Direct Fit Cooling Module keeps the 525 horsepower engine nice and cool.

Ignition and Electrical Combo
The 390 gets its spark from MSD components—Pro-Billet distributor, Digital 6AL ignition box, Blaster 2 Coil, and Super Conductor wires. The spark plugs are NGK V-Powers. Juice comes from an Optima Yellow Top battery, and a Powermaster Ultra Torque starter wakes up the 390 from slumber.

Transmission Combo
The 390’s 500-plus horsepower won’t do much good if it doesn’t get back to the 3.55-geared AMC Model 20 rear axle. That’s the job of this combo which includes an American Powertrain TK-600R five-speed, Center Force clutch and flywheel, and a Quick Time conversion bellhousing.

Vintage Air Combo
Since the AMX sees street duty in California, air conditioning is a given. Vintage Air supplied one of its Gen IV universal systems plus the drier, condenser, vent louvers, and other necessary parts.

Wheel and Tire Combo
Magnum 500 wheels were an option on AMXs from the factory. The Project Valkyrie team wrapped BFGoodrich Radial T/A tires around a set of Wheel Vintiques Magnum 500s. It’s a classic combination.

Heat Shield and Insulation Combo
The factory’s idea of sound and heat insulation in 1968 was limited to jute carpet backing, a hood liner, and maybe some asphalt-based undercoating. Not good enough for Project Valkyrie—it got a ton of Thermo-Tec sound and heat control mat, header wrap, and heat shielding for the starter and other underhood components. Dynamat supplied the hood liner.