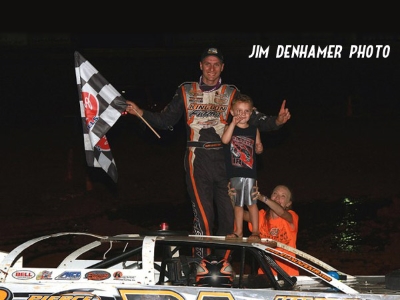 CLARKSVILLE, Tenn. – June 29, 2016 – Ryan Unzicker has been charging through Summer Nationals but has not had the finishes he would have hoped. That changed Tuesday night at Clarksville Speedway as he was able to claim his first DIRTcar Summer Nationals victory of the season.

Unzicker started on the front row with current points leader and reigning Summer Nationals champion Bobby Pierce to his outside. Pierce fell back to sixth early and then got tangled in a crash – he ultimately finished 18th.

Unzicker jumped to the early lead with Tanner English taking second. The two battled throughout the feature as Terry English, father of Tanner English moved into third. Unzicker nearly had his night ended as he tangled with a lapped car, but he was able to keep running.

The win is English’s first Summer Nationals victory since 2013.

“We started off slow with the Summer Nationals but we’re coming along now,” Unzicker said.

“I’m just a real good (low-groove) racer and I’ve been coming down (to Clarksville) for many years for the Toilet Bowl and the Summer Nationals, and I’ve just got my own little setup here,” said Unzicker, who won Toilet Bowl event at the track over the winter. “It played in my favor a little bit with the rain (staying) on the bottom, but our car’s been running good here for four or five nights in a row.”