TOLEDO, Ohio (June 30, 2016) – Myatt Snider is the son of longtime NASCAR TV analyst Marty Snider. Whether he eventually follows in his father’s broadcast footsteps remains to be seen. No matter the direction he chooses, he’s got options.

As it turns out, the 21-year-old ARCA Racing Series presented by Menards rookie has proven to be an effective race car driver, winning in his ARCA debut at Toledo Speedway back in May in the No. 22 Cunningham Motorsports-Original Louisiana Hot Sauce Ford. Snider also made his superspeedway debut at Pocono Raceway in early June where he led the most laps and finished ninth.

Having honed his racing skills in the short track world, safe to say the Charlotte, North Carolina college student is more than ready to take on Lucas Oil Raceway when the Sioux Chief PowerPEX® 200 presented by Jive comes to life Friday night, July 22, live on FS1. 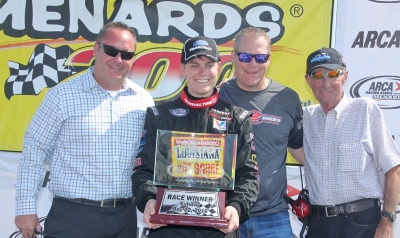 “I grew up racing on flat tracks in the Legends and Bandolero cars pretty much with no banking at all, so I don’t see Lucas Oil Raceway being a problem for me…I think I’ll fit right in,” Snider said.

“I’ve never seen it, but I’ve heard about it when the Xfinity Series used to race there. It’s super flat but fun to race I’ve heard. I don’t really know much about the track, but I’ll watch plenty of video before we get there.”

Snider, who has raced in more than 60 late model stock features over the last few years, competed at Martinsville Speedway, another flat half-mile track.

“Of all the tracks I’ve raced at, I’d say Martinsville is the closest to Lucas Oil. Martinsville’s flat all the way around, but the corners at Lucas Oil are more drawn out. It’s tighter at Martinsville. We get around there (Martinsville) pretty good, so we should be fine at Indy.”

“I feel so blessed to have this incredible opportunity with Cunningham Motorsports, and I am so thankful to everyone who had a hand in making it happen. The ARCA Racing Series presented by Menards is the logical next step in advancing up the ladder.”

“The adapting to the tires hasn’t been as difficult as I expected. I really expected to feel like I was riding on rocks, and that’s not the case. The major transition is in how you have to drive the car and that’s a work in progress for me.

“The biggest adjustment for me is in the braking. In the late models, using the braking was part of the technique in getting through the corners. With these cars, it’s totally different. As Paul Andrews (Snider’s Crew Chief) has preached, that brake pedal is your enemy. The more brake you use, the more heat you build into the front end. I continue to work on that and think I am really getting a big grasp on it, but it’s a work in progress. 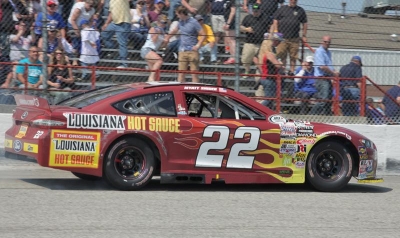 “Can’t wait to get to Lucas Oil. That’s Brickyard 400 weekend, so that should add a lot of excitement…there’ll be a lot of eyes on our race. We won at Toledo…we can do it again. I know Cunningham will give me a car capable of winning…I just have to do my part and get it done.”

Discounted tickets for the Sioux Chief PowerPEX® 200 are on sale now at several Menards stores in Indiana. The tickets are being offered at $10 off the gate price, and can be purchased up through July 21.

There are two practice sessions for the Sioux Chief PowerPEX® 200 from 1:35 – 2:20, followed by final practice from 3:00 – 3:45. Menards Pole Qualifying presented by Ansell is at 5:30. Pre-race ceremonies and driver introductions begin at 8:30 with the green flag waving just after 9:00.