BROWNSBURG, Ind. (August 18, 2015) – Matt Hagan knows hard work. As the owner and operator of an expanding cattle farm in rural Virginia, he is hands-on throughout the week on his farm before crawling into the Rocky Boots/Mopar Express Lane Funny Car on the weekends. 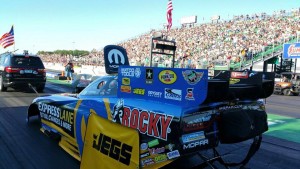 While most of the NHRA Mello Yello Drag Racing Series spent last weekend at home, Matt and the Brownsburg, Ind., based championship team traveled to Norwalk, Ohio, for the annual Night Under Fire event at Summit Motorsports Park.

The team utilized the day in Norwalk to test and gather valuable information for the remainder of the NHRA season including the six-race Countdown to the Championship playoffs.

This weekend’s NHRA Nationals at Brainerd International Raceway is the penultimate event of the 16-race Mello Yello regular season with only the prestigious U.S. Nationals over Labor Day Weekend near Indianapolis left before the fields of top-10 are determined to compete for NHRA world championships in the Countdown to the Championship.

“I really appreciate the hard work this Rocky Boots/Mopar team is putting in to be able to defend our championship,” Matt said. “Most NHRA teams were off last weekend but not us. We used the opportunity to go to the Night Under Fire to learn more about this car and to get ready for the Countdown.

“The guys are working extremely hard and we hope that it pays off in the form of a couple more Wally trophies and the big trophy at the end of the year. There’s a lot of racing left to do this year. The hard work starts at the top with Dickie and (Michael) Knudsen. They’re fine-tuning this car and what we’re capable of and the guys are just doing a great job right.”

Matt and the Rocky/Mopar team were runner-up at Brainerd in 2013. They have only lost to DSR teammates in the past four NHRA events.

“It seems we’ve been running into our teammates a little early on race day these past few weeks so we’ll go into Brainerd focused first on qualifying well and then go from there on race day. Brainerd is unique, it’s a pretty cool place and there are a lot of NHRA fans up there. I’m ready to get back in this Dodge Charger for another weekend of fun.”

All seven DSR drivers and owner Don Schumacher will attend to sign autographs for an hour of the free, festive event from 10 a.m. to 3 p.m. The Open House features a giant car and bike show, “cackle fest,” silent auction, various displays and contests.

About the Mopar Brand

Mopar (a simple contraction of the words Motor and PARts) was trademarked in 1937 with the launch of an antifreeze product but truly made its mark in the 1960s during the muscle-car era. From Mopar Performance Parts to enhance speed and handling for both road and racing use, the brand soon expanded to include technical service and customer support.

Mopar parts are unique in that they are engineered with the same teams that create factory-authorized vehicle specifications for FCA vehicles – a direct connection that no other aftermarket parts company can provide. A complete list of Mopar accessories and performance parts is available atwww.mopar.com.