JOLIET, Ill. (July 7, 2016) – As of a few weeks ago, back-to-back-to-back and defending event champion Chris Demke and the Maddern Racing team weren’t planning on racing at this weekend’s K&N Filters NHRA Route 66 Nationals. A last-minute invitation to represent the West Region in the prestigious JEGS Allstars shootout race was all it took to coax the team from their base in Southern California to the heat and humidity of the Chicagoland area.

Demke, the 2012 JEGS Allstars Top Alcohol Dragster champion, wasn’t one of the top two in West Region JEGS Allstars points before the invitation was passed down to him. 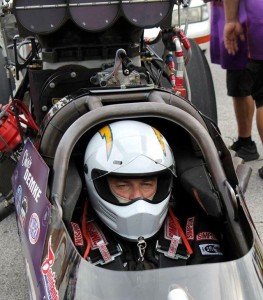 “I’m just really excited to be a part of the Allstars race. I wasn’t really the number two guy. I was number six on the list, so it was a real surprise for our team to be going to Chicago. Shawn Cowie pulled out and the division director started calling numbers three, four and five, but nobody wanted to go. It came down to us. Our team really enjoys the JEGS Allstars event. Based on our past performance at this race, we just couldn’t say no,” Demke said.

Demke finds himself refocused heading into the Chicago race weekend, moving on from a first-round loss at his last race, a regional event in Denver. His starting line routine was thrown off by the unconventional staging process utilized by a torque converter-equipped car in the other lane, resulting in a sizable holeshot loss. Demke was the number two qualifier.

“I’ve put it behind me,” Demke reassured. “I hate losing like that, but I have the mental fortitude and the experience to go out, put it behind me and focus on the next event.”

Demke knows his crew, led by team owner Jerry Maddern and car chief Kevin Watson, will provide him with a car capable of winning rounds in the Midwest heat. Crew member Greg Rice is also returning to the team for the first time since undergoing surgery last month.

“I have every confidence that Jerry and Kevin will have the car running as quick as ever. Those guys aren’t afraid of hot conditions. I’m sure we’ll be in contention for both events.

“Greg Rice will be at this event. We’re very happy to have our full team back in gear. It’s going to be necessary at Chicago. To win both events, it will require a total of nine rounds of qualifying and eliminations passes. We’ll need all hands on deck, and with Greg present I’m sure we have the crew to get the job done.” 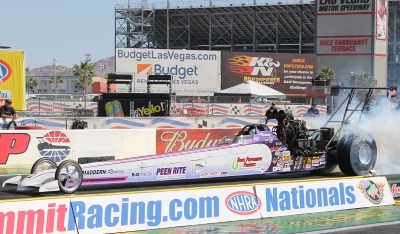 Chris Demke and the Peen Rite/Boost Performance Products Top Alcohol Dragster team will hit the track for two qualifying sessions on Friday, July 8. They’ll move on to first round of the JEGS Allstars race on Saturday morning, which will also count as their third and final qualifying session. JEGS Allstars eliminations continue on Saturday. Eliminations for the K&N Filters NHRA Route 66 Nationals will take place on Sunday.