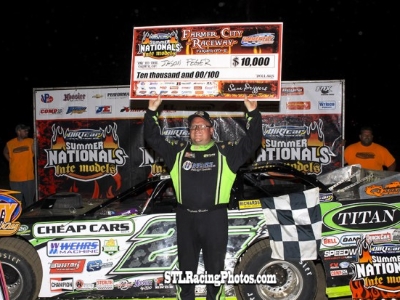 Feger started back in ninth, but made steady progress through the field and battled past Devin Gilpin with 10 laps to go. Through the end of the feature, Feger held off Ryan Unzicker, who has one win on the season and Tim Manville, who powered forward from a 20th place starting position.

The win was the fourth straight podium finish for Feger on the tour.

Unzicker finished in second with Manville in third, Gilpin in fourth and Billy Moyer in fifth. Series points leader Bobby Pierce closed out the night in sixth.

The DIRTcar Summer Nationals returns to action on Saturday night at Highland Speedway in Highland, Ill.