JOLIET, Ill. (July 10, 2016) – Terry McMillen, driver of the AMALIEⓇ Motor Oil XTERMIGATORⓇ Top Fuel Dragster, picked up a round win at the Route 66 Raceway this weekend. The first round win against Shawn Langdon helped him get back on track in the chase for the tenth spot in The Countdown.

After a promising start to the 2016 season, McMillen has seen his share of struggling since Epping. “We’re finally starting to see a little light at the end of the tunnel,“ McMillen said. “We thought we were chasing an ignition issue and we think we finally found the issue in the clutch department. We just got into a new batch of clutch discs that weren’t playing friendly with our other batch. It’s just one of those struggles of a single car team that we’ll continue to fight through.”

With just five races before the cut-off for The Countdown, McMillen trails Leah Pritchett by 30 points. “We’ve been here a few years ago against David Grubnic, “ McMillen said of a points chase that left him nine points shy of his first Countdown. “We know what we have to do and the next few races are going to be exciting for us as we fight our way back into this hunt.” 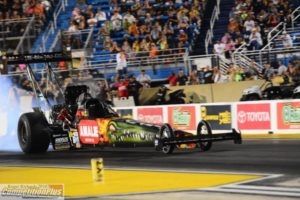 The next stop for McMillen on the NHRA tour is Denver, the first race of the Western Swing and the first to be televised live on FOX. “Start to finish live coverage on FOX is something we’re really excited about,” McMillen said. “I think it may be one of the greatest things that has happened to our sport in a long time. It will be great for our sponsors, fans and soon to be fans that watch us on FOX this summer.”