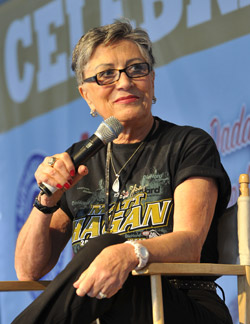 A limited number of tickets are available for fans to purchase to gain entry into the Shirley Suite, where Muldowney will watch nitro qualifying and eliminations Friday-Monday at the Big Go.

With a ticket to the Shirley Suite, fans will be able to visit with Muldowney, the 1982 Top Fuel winner of the Chevrolet Performance U.S. Nationals, chat with her about the weekend’s racing action, take photos and get her autograph.

Muldowney, a pioneer for women in motorsports who became the first female to earn an NHRA Top Fuel license in the 1970s, is one of four women who have won the Chevrolet Performance U.S. Nationals in NHRA history. She earned 18 victories and 13 No. 1 qualifying positions during her racing career. She was ranked No. 5 by historians of the sport on the list of NHRA’s 50 greatest drivers in 2001.

The most historic and tradition-rich event in the NHRA Mello Yello Drag Racing Series, the Chevrolet Performance U.S. Nationals has been contested annually since 1955 and its past list of winners includes ‘Big Daddy’ Don Garlits, Muldowney, Don ‘The Snake’ Prudhomme, John Force, Bob Glidden, Tony Schumacher and Kenny Bernstein, among other legends. 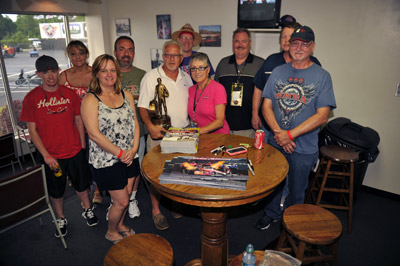 The race is the 18th of 24 events in the NHRA Mello Yello Drag Racing Series and the race will once again be showcased in eight hours of coverage on ESPN and ESPN2. Richie Crampton (Top Fuel); Alexis DeJoria (Funny Car); Shane Gray (Pro Stock); and Eddie Krawiec (Pro Stock Motorcycle) were last year’s winners.

The Chevrolet Performance U.S. Nationals will feature intense side-by-side racing at more than 320 mph, as drivers in Top Fuel, Funny Car, Pro Stock and Pro Stock Motorcycle compete for their share of the $2 million purse and important world championship points.

The stakes will be high as teams will battle for the final top 10 spots for the Mello Yello Countdown to the Championship playoffs. With an increased amount of points in play due to the recent change to the point-and-a-half system for this event (150 points to the winner), the drama on Championship Monday is expected to be more amplified than ever. Perhaps more importantly, drivers will compete to earn a permanent spot in NHRA history alongside the many legends who’ve won this race in the past, as a Chevrolet Performance U.S. Nationals winner.

The event also will showcase the Traxxas Nitro Shootout, where the top drivers in Top Fuel and Funny Car will race for $100,000 paydays in separate bonus races. The thrilling competition in both the NHRA J&A Service Pro Mod Series and the NHRA Lucas Oil Series, which will be highlighted by its annual Mopar HEMI Challenge for Super Stock cars, will also be featured during the event.