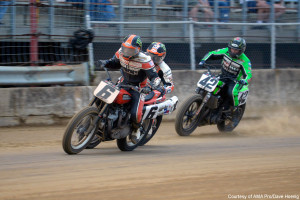 The event started with Zanotti Racing’s Kenny Coolbeth Jr. leading the way ahead of Smith and Baker, but the race was quickly red-flagged when SBR’s Shawn Baer took a nasty tumble on the highline. His rear tire got too far out and touched the airfence, throwing him violently from the motorcycle and snapping the bike in half. The front end careened across the track, hitting Zanotti’s Henry Wiles’ helmet with additional debris spewing forth in a number of directions. Luckily, Baer was able to avoid serious injury, Wiles got his back-up helmet and the airfence was mended. Riders soon were ready for the remaining 23 laps.

Brad Baker Indy Mile 2015
Off the second start, Coolbeth again tussled with Smith for the lead while Mees, who had to use his provisional start card to even make the main-event after some trouble earlier in the day. He’d pushed up the field from the back of the grid to get in the mix for the lead and on the fourth lap it was Smith, Mees, Coolbeth, Lloyd Brothers’ Johnny Lewis and Baker through five.
Baker made use of a high entry, tight exit to whip himself up the field, moving up to second-place by Lap 6 while Coolbeth lost touch with the front runners, fighting with Lewis and Wiles for fourth.

This went on until Lap 10 when Don’s Kawasaki’s Jeffrey Carver Jr. went down, forcing a second red flag. Running order was recorded with Mees, Baker and Smith in the numbers one, two and three positions for the second restart.

The three riders again took hold of the front once the battle resumed, swapping spots throughout the next five laps. On Lap 15 however, a third red flag was flown when Wiles suffered an off.
Ten laps remained when riders set off from the line again, and it was Smith, Mees, Coolbeth and Baker through four early on. Coolbeth dropped off pace somewhat, falling to fourth, then fell way back with a mechanical issue. He would end the night in 15th.

At the front, Mees, Baker and Smith the back-and-forth dance, with Mees heading the pack as they crossed the stripe for the final lap. Baker took the high line into Turns 3 and 4 and was able to use his momentum and the draft to inch past Mees just before the checkers. Smith benefitted from a late draft as well, displacing Mees to the final step on the podium.

“All I can say is, what an amazing race,” said Baker. “Great job to Jared (Mees) for coming up from the back of the pack. I had a little bit of the high-low line going on during the entire race and I really used it to my advantage on the last couple laps. It was an excellent run and I knew I had that move down with three or four laps to go. We were playing mind games out there to get position to come off of turn four and I fought hard for it and got the win. I had an amazing motorcycle underneath me tonight.”

Mees holds on to the GNC1 points lead ahead of Smith in second. Sammy Halbert sits third with Baker in fourth and Coolbeth in fifth.

Bromley was the early leader in the Main Event, but he and the rest of the grid were forced to restart after the opening lap when two riders went down. Armstrong powered from the outside of the front row to the front of the pack on the restart and led the way ahead of Bromley, M&J Racing’s Ryan Wells, Roy Built’s Jamison Minor and Racing Unlimited’s Davis Fisher. Fisher pushed his way up to third before a second red flag was flown on Lap 3 after K.C. Cycle Helmet World’s Kolby Carlile went down.

Carlile was able to remount and continue racing, and the second restart saw Armstrong once again push up to the front off the line. Wells and Bromley gave chase, but Bromley pushed up the ranks to second and then picked-off Armstrong for the lead. The Suzuki rider answered back in the following turns and from there held the front to the finish.

“It feels awesome to get this win,” said Armstrong. “We worked all week trying to get the Kawasaki together but we had issues with it on the dyno last night, so we pulled out the old Suzuki, and thankfully she did me good tonight.”

Wells would end in fourth-place followed by Minor in fifth. Ron Ayers Motorsports’ Tristan Averty finished sixth followed by Smith Racing’s J.R. Addison in seventh. Fisher, the current points leader, ran into a technical issue late in the race and dropped back to 15th.

Fisher holds to the lead despite his misfortune, with Armstrong trailing six points back in second. Minor is third followed by Bromley in fourth and Addison in fifth.