MORRISON, Colo. (July 24, 2016) – The NHRA Mile High Nationals wasn’t kind to Terry McMillen, driver of the AMALIEⓇ Motor Oil XTERMIGATORⓇ Top Fuel Dragster and his team this weekend. The opening round loss to Brittany Force only amplified McMillen’s frustration in his quest to get his team into the Countdown. He remains less than two rounds behind the coveted 10th spot with just four races remaining.

“The weekend started wrong for us and just kept getting tougher from there,” McMillen said. When the team arrived Thursday they found their transporters sinking into the asphalt, in danger of tipping. They spent most of Thursday releveling the trucks with the help of the Denver Fire Department, the NHRA and Bandimere Track personnel.

“The track officials and the NHRA were very considerate and helpful in trying to get us a safe environment to work from,” McMillen said. “It was just an unfortunate circumstance that started us out on the wrong foot and it never really got any better from there.”

In the rain delayed first round of qualifying McMillen’s troubles continued. “The throttle hung open on the burnout and I couldn’t get the car to stop. I finally just had to shut it off”, McMillen explained. The team sat out the late second qualifying session in hopes of finding and eliminating any more issues.

In the final qualifying session, McMillen and crew thought they had a run going that would better their qualifying position. “We were a little slow at the step,” McMillen explained. “Then the car really started to get after it. Then it picked up the front end about 500 feet and when it got about two or three feet off the ground and drifting towards the center line, I thought it might be a good idea to lift.”

“I just told our guys we were going to have to treat Denver like Vegas,” McMillen said. “What happens here, stays here. Lets leave all this here, head back to sea-level conditions and fight our way back into the top 10.”

The next race is in Sonoma, California with qualifying on Friday and Saturday July 29 and 30th. Sunday’s eliminations will be broadcast live on FOX television network. 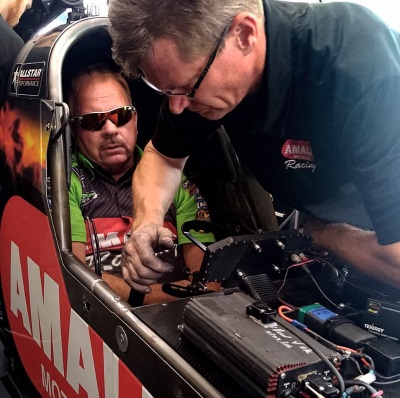