SONOMA, Calif. (July 31, 2016) – After a frustrating outing in Denver, Terry McMillen driver of the AMALIEⓇ Motor Oil XTERMIGATORⓇ Top Fuel dragster found a little hope in a first round loss to defending NHRA World Champion, Antron Brown. McMillen posted a 3.819 e.t. at 315 miles per hour to Brown’s 3.715 e.t. at 324 mile per hour.

“You know this weekend started out a whole lot better than Denver,” McMillen said of his solid baseline qualifying run in the first round of qualifications on Friday. “It got a little rough in the middle, but this Amalie crew kept their heads down and stayed after and it and it showed in the first round today. I’m real proud of all of them.”

The “Franken-blower” is in reference to Frankenstein and a blower that crew chief Rob Wendland tweaked and worked on to piece together from other blowers that had met similar fates and a new case from Darren Mayer at DMPE. While the ‘Franken-blower’ didn’t dyno as well, it did perform better in racing conditions.

“It’s really hard to imagine that you can go out there a run a 4.28 and put a piston in the pan and then say, O.K. we’ve got this,” Rob Wendland said after the team’s fourth and final qualifying attempt. “But that’s kind of how we felt when we saw the performance of that blower.”

“Our plan is to just put this car in the box and take it out of the box with the same tuneup in Seattle,” Wendland continued. “If we can run those same numbers in Seattle we’ll have something to work with.”

“We’re 33 points out of this thing (The Countdown) with just three races to go,” McMillen explained. “We’re chasing the latest addition to the Schumacher stable and I can’t think of anytime that a Schumacher car hasn’t been in the Top 10. We’ve got our work cut out for us and we’re hoping that 2016 is the first time a Schumacher car doesn’t make the Top 10 because that means we finally conquered our goal to crack the Top 10 for the Countdown.”

Qualifying for Seattle starts next Friday with live elimination coverage on FOX next Sunday. 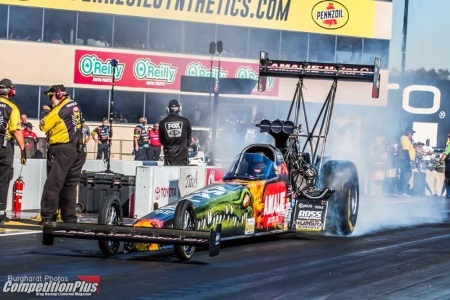