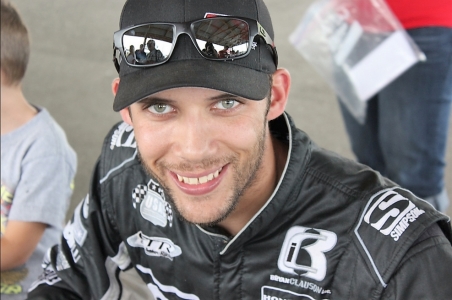 INDIANAPOLIS (August 8, 2016) — Bryan Clauson, 27, one of the most decorated and accomplished drivers in the history of the United States Auto Club, succumbed to injuries sustained in a crash while leading Saturday night’s “Belleville Midget Nationals.”

“It is with extreme sadness that we must accept this devastating news,” said USAC CEO/President Kevin Miller. “This is one of the darkest days in the history of the United States Auto Club. Not only have we lost one of our greatest USAC Champions, we have lost a true ambassador for all of motorsports. Bryan’s passion for our sport was unparalleled. He was a leader not only on the track, but in the pits with his fellow competitors. There is a tremendous hole in the hearts of our community today as we grieve his loss along with his family and friends.”

“Bryan was a mentor, a competitor, and a close friend,” USAC Series Director Levi Jones said. “I am truly saddened by his loss and we will miss him dearly in our sport.”

Bryan became just the sixth driver to reach 100 USAC feature wins during a career, doing so earlier during the 2016 season during the “Winter Challenge” at Canyon Speedway Park in Peoria, Arizona. In the process, he became the youngest to reach the feat.

Just three days prior to his accident, on Wednesday at Solomon Valley Raceway in Beloit, Kansas, Bryan earned his final USAC victory – his 112th – during a USAC National Midget event. His 112 career USAC wins rank behind only USAC Hall of Famers Rich Vogler, A.J. Foyt, Sleepy Tripp and Mel Kenyon.

This season alone, Bryan had already racked up 15 USAC wins and made his third career start in the Indianapolis 500, leading three laps at the midway point of the 100th running of the famed race.

Bryan was a highly-respected competitor among his peers – a true professional in every sense of the word – setting an example of a champion on and off the racetrack with his positive attitude and a personality that drew people to him, which made him a fan-favorite at racetracks all over the country.

A gifted and talented racecar driver; a humble and exemplary man. That was Bryan Clauson.

USAC expresses its deepest condolences to Bryan’s family, team and many friends throughout the racing community.

Persons interested in donating to Bryan’s fund may direct their contributions to the USAC Benevolent Fund website at http://usacbf.org/cash-donation/.

Donations may also be made by check. Please make the check out to “USAC Benevolent Foundation” and mail to:

Last night, the 7th of August, we said goodbye to our son, my fiancé, our friend, Bryan Clauson. He was surrounded by family and friends and we were grateful that we could experience his final moments with him.

Our Bryan fought to the end with the same desire that he demonstrated behind the wheel of all the various race cars he would park in victory lane. However, we were more proud of our Bryan that took a moment to make a young fans day, or demonstrated his uncommon kindness and appreciation toward his friends, family and fans.

We would like to thank everybody who has shown their concern toward us and kept us in their prayers. We will never be able to truly thank you. We would also like to thank the staff at Bryan Medical Center who stood and fought with our Bryan since he arrived here early yesterday morning.

We know that our Bryan is also your Bryan and that you would like to participate in honoring him. A service will be held at the Indianapolis Motor Speedway at a date and time to be announced soon. In lieu of flowers, or to make a donation, people may direct their contributions to the USAC Benevolent Fund website at http://usacbf.org/cash-donation/ or checks can be made out to the USAC Benevolent Foundation in the name of Bryan Clauson. The address is 124 E Northfield Drive, Suite F #129, Brownsburg, IN 46112.

Thank you for being a part of our Bryan’s life.