KENT, Wash. (August 7, 2016) – Terry McMillen, team owner and driver of the AMALIEⓇ  Motor Oil XTERMIGATORⓇ Top Fuel Dragster missed a golden opportunity to close the points gap between Leah Pritchett and himself for the final spot in The Countdown on Sunday at the NHRA Northwest Nationals near Seattle. McMillen and Pritchett were both eliminated in the first round of competition. Just 19 points separate the two competitors with two races remaining before the Countdown begins.

McMillen made consistent improvements in qualifying and posted an elapsed time 3.792 seconds to qualify 12th in the close and highly competitive Top Fuel field. “We really feel like we have our hotrod back,” McMillen said after falling to Clay Millican in the first round. “We’ve got a car that just wants to go down the track and run in the seventies, we just ran into a fuel system malfunction in the first round that killed our chance to make up some ground.”

“We’re going to go down swinging,” McMillen added. “I’m so proud of the fight in our team. These guys just keep there heads down and they keep working hard to get Rob (Crew Chief Wendland) a consistent race car. Our family, friends and fans deserve an opportunity to race for the championship and we’re going to give it everything we have to make that happen. This is what NHRA Drag Racing is all about.”

The next stop on the NHRA tour August 18-21 at the Brainerd International Raceway in Minnesota.

McMillen’s team will also make appearances race week at Goodson Tools and Supplies in Winona, Minnesota on Tuesday and O.K. Tire and Bait on Wednesday in Randall, Minnesota. The public is invited to attend. 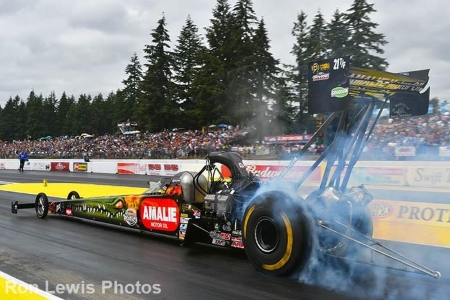