KENT, Wash. (August 18, 2016) – While most of the top NHRA Top Alcohol Dragster teams are racing at the Brainerd national event this weekend, 2014 TAD world champion Chris Demke and the Maddern Racing team will be competing for their fourth consecutive event title at the Pacific Raceways regional event, August 19-21. The decision to race Seattle was an easy call for the California-based driver, who raced to the final round at the NHRA Northwest Nationals at Pacific Raceways a couple weeks ago.

“We’ve won this race the last three years. We needed some in-region races. We missed out on the Woodburn and Mission races, so we figured we’d hang out in Seattle for the regional race then head east for the U.S. Nationals in Indy,” Demke said.

Demke’s Peen Rite/Boost Performance Products blown alcohol dragster was running on the edge at the NHRA Northwest Nationals. Demke qualified number three with a wheelstanding 5.221 et at 273.66 mph. His first-round 5.219 et was the tenth quickest pass for a blown alcohol dragster. The Maddern Racing team then earned two more round wins over Shawn Cowie and James Stevens. Demke was scheduled to face rival Joey Severance in the final round before rain showers forced the rescheduling of the race. The final round will be completed during qualifying at the NHRA Fall Nationals in Dallas in September.

The Maddern Racing group also spent the weekend celebrating the engagement of Demke’s younger sister, Aimee, and car chief Kevin Watson, who was celebrating his birthday during Friday qualifying.

As the Jerry Maddern-led Peen Rite team moves on to this weekend’s regional event, they must adopt a different tune-up than the one that carried Demke to the final round at the national event.

“At some tracks it helps to race there back-to-back, but I don’t think that’s the case with Seattle this year. The track prep won’t be as good as it was at the national event – it was incredible – and the weather was cool. It’s a completely different situation here for the regional with the temperatures expected to be 15 to 20 degrees warmer, as well as elevated track temps,” noted Demke.

Chris Demke and the Peen Rite/Boost Performance Products dragster will take to the Pacific Raceways quarter-mile for Top Alcohol Dragster qualifying sessions at 5:30 PM on Friday and noon and 3:30 PM on Saturday. Eliminations are scheduled to begin at noon on Sunday. 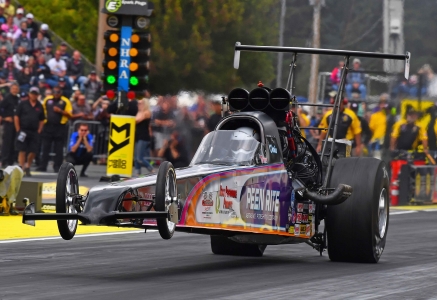