SPRINGFIELD, Ill. (August 21, 2016) – Justin Haley had never driven a stock car on a dirt track before, nor had he ever won an ARCA race. It was also the first time the Winamac, Indiana driver had driven a Mason Mitchell Motorsports (MMM) car. None of it mattered though to the 17-year-old driver who wheeled the No. 98 MMM-Braun Auto Group Chevrolet to victory lane at the Illinois State Fairgrounds Mile Dirt in Springfield Sunday afternoon.

“I tried to hold him (Unzicker) off the best I could,” Haley said. “I stayed strong through that first corner. I was very impressed how well he ran us, up on the outside of us. We almost wrecked down the backstretch, but we held onto it.” 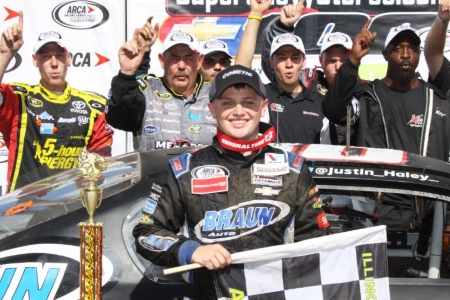 “I’m a little surprised,” Haley continued. “Never would have dreamed in a million years my first ARCA win would come on a dirt track, but to be here in victory lane is super cool. This dirt track racing is definitely different…it’s tough. I would never have expected this. I’m really happy for Mason Mitchell Motorsports…it’s so cool to get those guys a win here.”

A crash on the backstretch inside of 10 laps remaining between the leader Josh Williams and Unzicker prompted the final caution that sent the race into overtime. With the crowd on their feet, Unzicker, on the final restart, held door-to-door with Haley on the outside through turns one and two. As Haley and Unzicker powered off the corner, Haley pulled ahead and opened up a hole for Fike who charged through to finish second, five lengths away from the winner.

“Considering how bad our car was at the beginning of the race, second (place) feels like a win today,” Fike said. “We just couldn’t get off (turn) four like we needed to…loose in and loose off all day. Felt like the track got a little better the last 40 laps, and the restarts helped a bunch.”

Fike, in the No. 27 MatrixCare-Consonus Healthcare-RD McMillen Ford, had eight restarts to choose from as caution after caution bunched up the field throughout the 100-lap/100-mile race, specifically over the back half, and certainly on lap 93 when everything changed.

Williams had just taken the lead from Chase Briscoe and appeared to be on his way to victory when the field slowed for caution on lap 88 after Sarah Cornett-Ching, Kelly Kovski and Tom Hessert tangled in turn three. The field went back to green on lap 93 with leader Williams on the bottom and Unzicker on the outside in second. Unzicker stayed door-to-door with Williams off turn two before Williams powered ahead down the backstretch. Before they got to turn three, contact between the two sent Williams into the outer retaining wall while Unzicker continued on.

“We barely touched back there,” Unzicker said. “Barely hit is right rear quarter. He wasn’t quite clear of our nose. I know they’re upset with me right now, but honestly, we weren’t even in position to take the lead. I never would have done anything intentionally to wreck him. I hate it for him and his team.”

To the delight of a hometown crowd, Unzicker drove the No. 24 RJR Transportation-Hendren Motorsports Chevrolet home to a career-best third-place finish after nearly winning it.

“It was our best finish today…that part feels good,” Unzicker continued, “but it’s disappointing to get so close to the win without getting there. We got stuck on the outside on several of those restarts…got loose up there and lost our momentum. We did the best we could up there.”

Ken Schrader hovered in the top-10 all day and finished fourth in the No. 22 Cunningham Motorsports Ford.

After dominating much of the race with 62 laps-led overall, Chase Briscoe finished fifth in the No. 77 Big Tine Ford, arguably disappointing for having led the most laps including inside of 20 laps to go. However, on lap 81, Briscoe slid high in turn three negotiating lapped traffic while Williams powered underneath for the lead after the hole opened up.

The field was lined up according to practice speeds after Menards Pole Qualifying was canceled due to saturated infield conditions that backed up the schedule. Briscoe, fastest in practice, led at the onset and pulled out to a five length lead before he opted to pit on lap 24. Will Kimmel, who didn’t pit, took the lead and led the next 15 laps up through lap 38 before he too headed to pit road for service.

Tom Hessert cycled up through the leader board and led the next four laps before Briscoe regained the top-spot on lap 43. Briscoe led up through lap 81 before Williams got by.

Kimmel was in position for a shot at the win before engine woes cut his run short 21 laps shy of the finish.

The ARCA Racing Series presented by Menards heads to the DuQuoin State Fairgrounds Mile Dirt next for the General Tire GRABBER 100 Sunday night, September 4, marking the first night race for the ARCA tour at DuQuoin.