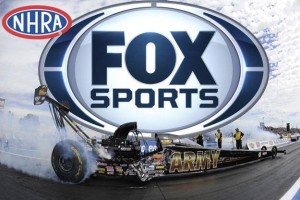 GLENDORA, Calif. (July 14, 2015) – NHRA and FOX Sports officials jointly announced today that starting in 2016 the NHRA Mello Yello Drag Racing Series will be televised by FOX Sports 1 (FS1) with four events airing on the FOX national broadcast network during each season of the long-term agreement, providing the world’s fastest motorsport with live coverage of a majority of its events.

FOX Sports, which is already the home to high-profile races in NASCAR, Monster Energy Supercross, the FIM MotoGP™ World Championship, the TUDOR United SportsCar Championship, the FIA World Endurance Championship, the 24 Hours of Le Mans and the fully electric FIA Formula E Championship, among others, will significantly expand on its annual motorsports coverage when it adds NHRA Mello Yello Drag Racing Series programming to the lineup next season.

The agreement calls for FS1 to provide coverage of Friday and Saturday qualifying and Sunday eliminations for each NHRA Mello Yello Series event, with a minimum of 16 Sunday eliminations shows to be presented in a live coverage format, and the remainder shown either in weekend afternoon or primetime time slots. Four of those live elimination shows will air on the FOX national broadcast network.

“This really is a game-changer for NHRA regarding the presentation of our marquee product, the NHRA Mello Yello Drag Racing Series,” said Peter Clifford, NHRA president. “FOX Sports promises to be just the right media partner we’ve been looking for to help give our professional series the stage it deserves and to provide our passionate fans the timely, quality coverage they are craving.”

The Sunday elimination shows will consistently be presented in three-hour programs and the Friday/Saturday qualifying shows will be two-hours of coverage. In addition, FS1 and FS2 will provide multiple re-airs for all of the events. FS1 also will provide coverage of select NHRA Lucas Oil Drag Racing Sportsman Series events. In total, FOX national networks will feature more than 450 hours per year of NHRA programming.

The deal also includes NHRA racing on FOX Sports Racing in Canada and the Caribbean, as well as FOX Sports GO, the critically acclaimed app that provides live streaming video of FOX Sports content at home or on the go, and now available in 70 million households. Customers of participating video providers may access the live stream of FOX Sports’ NHRA programming through the FOX Sports GO app for iOS, Android, Fire Tablets and Fire Phones, Amazon Fire TV and Fire TV Stick, select Windows devices, and on desktops through FOXSportsGO.com. Fans can download the mobile app for free from the iTunes App Store, Google Play, Amazon App Store and Windows Store.

“Committing to 16 live events, including four on the FOX broadcast network, certainly demonstrates the commitment and excitement level we have for the National Hot Rod Association,” said Jamie Horowitz, President of FOX Sports National Networks. “As home to the strongest and most diverse collection of racing properties on television, adding NHRA drag racing to the weekly lineup absolutely solidifies FOX Sports as the leader in motor sports television.”

FOX Sports has also committed to heavily promoting all NHRA Mello Yello Series shows throughout its media platforms. NHRA will sell advertising and sponsorship packages and assume responsibility for the production of the shows in concert with FOX Sports, with the creation of an in-house television production group as well as handle all international distribution for the programs.

FOX Sports will join the NHRA in offering this exciting addition to the FOX Sports racing portfolio to the linear and digital marketplace.