BROWNSBURG, Ind. (September 5, 2016) – It turned out to be the closest Terry McMillen has been in his career to making the NHRA Countdown to the Championship.The season-long battle left him and his AMALIEⓇ Motor Oil XTERMIGATORⓇ team just one point shy of his dream to compete for the Championship.

McMillen’s week started on a good note as the “Fan Vote” and lottery style drawing landed him a spot the the TRAXXAS Shootout. The $100,000 race within a had McMillen matched Antron Brown. Brown defeated McMillen in the first round.

“I just want to thank all of the fans that voted for us,” McMillen said. “We never take for granted all of their support and the support they give to the NHRA. It was truly an honor to represent them.” 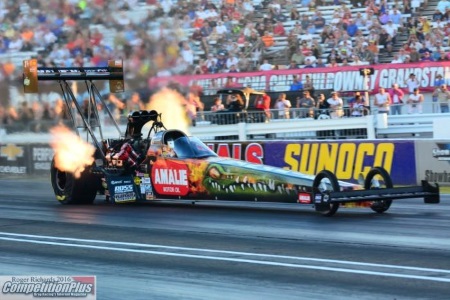 “I can’t even begin to explain how proud I am of Rob Wendland and this crew,” McMillen explained. “We’ve fought through a lot of adversity to just to be this close. These guys worked and fought valiantly. I wouldn’t trade them for any team out here.”

McMillen’s 2016 quest began with round wins in all of the first three races including a final round appearance at the AMALIE Motor Oil Gatornationals that took him as high as fifth in the points standings. A blower explosion in Houston changed the course of the season for McMillen as the team fought to find a consistent tuneup for the new chassis. Things began to change for the better as McMillen set a new career best in Topeka with a 3.762. But in the end, it turned out to be just a little short.

“It’s extremely hard to compete week in and week out with these mega powerhouse teams that are out here,” McMillen added.. “I still believe that persistence outweighs resistance. Our dream didn’t die here today in Indy. We’re still a small team with a big dream. We’ll battle back, reset goals and work the plan. Right now that plan is to finish the season strong and ruin the day of any contender we face on race day.”