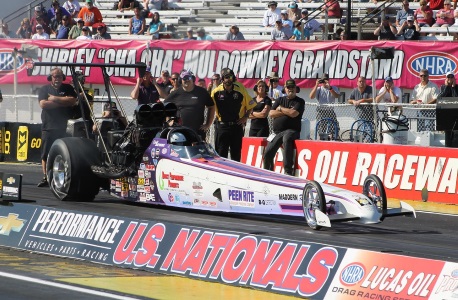 BROWNSBURG, Ind. (September 6, 2016) – Top Alcohol Dragster veteran Chris Demke entered last weekend’s 62nd annual Chevrolet Performance U.S. Nationals with a lot on his mind. Of course he was thinking about winning a second U.S. Nationals title, but he was also trying to shake a mental funk that he picked up after sustaining a dramatic crash at the Seattle regional race just weeks prior. As it turned out, it wouldn’t take long for the past world champion to move past the accident.

Driving Maddern Racing’s spare car, the same car he drove to the 2014 NHRA Top Alcohol Dragster world championship, Demke started off U.S. Nationals qualifying with another tense situation. He was already halfway down the Lucas Oil Raceway strip when he realized the steering wheel had become detached from the steering shaft upon launch. The Peen Rite/Boost Performance Products dragster was heading for the left retaining wall as it crossed the finish line at around 90 mph, but Demke took matters into his own hands.

“In my mind I was thinking, ‘I’m not ending my weekend like this.’ I grabbed the steering shaft with my hands and cranked it as hard as I could to the right. It felt like I steered it away from the wall, but more than likely the car moved over from the parachutes deploying automatically. Either way, the car remained in one piece to race another round,” Demke said with relief.

While the incident didn’t help in the performance department, it did allow Demke to move on from his jarring crash at Seattle.

“As crazy as it was, that run really helped me put the crash behind me. It was a test of how much I really wanted to race. I just had that thought of, “there’s no way I’m going to let this car hit a wall again.” What I went through in Seattle changed my mentality. Physically I was fine, but mentally I had some demons to deal with.”

The steering situation was promptly fixed by car chief Kevin Watson and the Maddern Racing crew, allowing Demke to pilot the Peen Rite rail to passes of 5.287, 5.324 and 5.303 to qualify eighth in the strong field.

“I really felt comfortable after qualifying. We knew we had a nice, consistent car going into eliminations. However, going into eliminations, especially being at Indy, I felt more butterflies than I did that first round of qualifying. I was extremely nervous, but Kevin got the tune-up right and we ran our low et of the weekend,” Demke recalled of his first-round win, 5.281 over David Brounkowski.

Demke’s time at the U.S. Nationals ended in the second round when the car and driver slowed when their opponent stepped up. Demke cut a .129 light and ran a respectable 5.345 alongside Midwest hitter Mia Tedesco, who ran 5.289 to move on.

“Unfortunately I just messed up on the starting line. After switching to the different car with different pedals, I was having trouble holding my staging rpms all weekend. The rpms dropped and I hurriedly rushed to bring the rpms back up. That distracted me and I had a bad light,” admitted the 2014 U.S. Nationals champion.

Despite the sour points of the weekend, Demke was upbeat about the team’s performance at the prestigious Labor Day race. He’ll have another chance to race for a Wally in a couple weeks at the NHRA Carolina Nationals, September 16-18, at zMAX Dragway in Charlotte.

“We did much better than we expected. I feel comfortable in the car again, but I think I still need some seat time before I’m back to where I was before the crash. 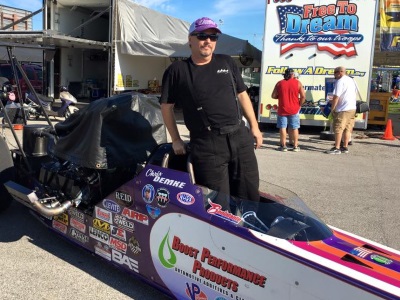