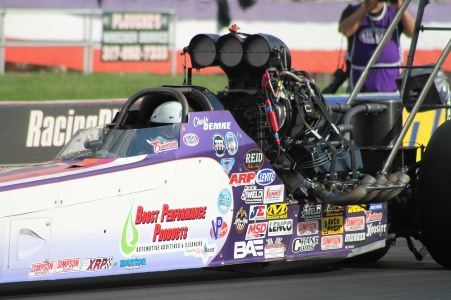 “I would love to add Charlotte to the list of racetracks where I’ve won. It’s one of Bruton Smith’s tracks, so it’s an awesome racing facility. It’s the only four-wide dragstrip in the world, and it’s in the heart of racing country. The fans in the Charlotte area are all about any kind of racing, and they love drag racing,” said Demke, who won the 2014 Charlotte event as part of a trifecta weekend during which Demke won the Carolina Nationals, Keystone Nationals, and the NHRA Lucas Oil Series national championship.

The 2016 NHRA Carolina Nationals, Sept. 16-18, is Demke’s second race back in the seat of his championship-winning Maddern Racing dragster after walking away from a violent crash in the team’s formerly experimental “X-car” at the Seattle regional race. With just a couple weeks between the crash and the prestigious U.S. Nationals across the country in Indianapolis, the Jerry Maddern and Kevin Watson-led team worked to prepare the second Peen Rite dragster for Indy. Demke qualified sixth with a 5.287 and bowed out in the second round.

While winning is always on the minds of the Peen Rite/Boost Performance Products team, Demke will spend this weekend focusing on the mental aspect of successfully pursuing race wins and a second national championship.

“After my crash in Seattle, getting back in the seat at Indy was challenging. The old saying about getting back on the horse really holds true. I would’ve liked to do better at Indy, but our team is very satisfied with our performance. In the end, it was my driving that failed us. The only thing that’s going to solve that is more laps. The sooner I get back in the seat, the sooner I get back to one hundred percent behind the wheel,” Demke claimed.

Chris Demke and the Peen Rite/Boost Performance Products Top Alcohol Dragster team will take to the zMAX Dragway quarter-mile for Friday’s qualifying sessions around 11:30 AM and 1:45 PM. A third and final qualifying session is scheduled for 10:30 AM on Satuday, followed by first round of eliminations at 5 PM. Eliminations will continue on Sunday.