CONCORD, N.C. (September 17, 2016) – He narrowly missed the NHRA Countdown to the Championship at the last race in Indianapolis by one point. Now, Terry McMillen, driver of the AMALIEⓇ Motor Oil XTERMIGATORⓇ Top Fuel Dragster finds himself 0.006 seconds short of making the field at the NHRA Carolina Nationals.

“Top Fuel is a game of milliseconds,” McMillen explained. “We just can’t catch the break we need right now.”

McMillen’s team struggled as they added new clutch discs to the rotation. “We’re into a new batch of discs and that’s just not something you want to do on a race weekend,” McMillen continued. “The big teams would put this on their clutch dyno or make a bunch of test laps before even thinking about adding a new discs to the mix. We don’t have those options. So, we’re not going to make excuses. We’re just going to suck it up and get this figured out so we can finish strong and get our program headed in the right direction.”

McMillen will be making an appearance at the NHRA FanFest in St. Louis before the event next week. The event is open to the public and will take place on Thursday, September 22nd at the Ballpark Village (near Cardinal Stadium) with an autograph session from 6PM – 7:30PM. The event will include Show Cars, Live Entertainment, Interactive Displays and Prize Drawings. 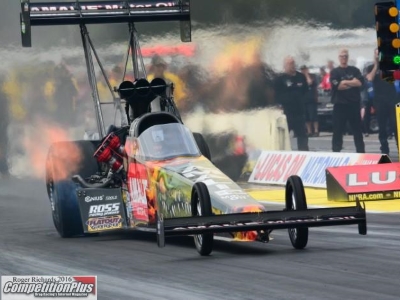