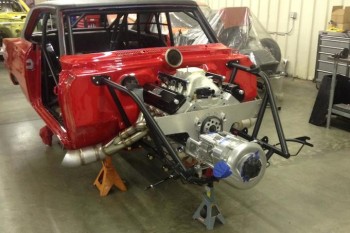 Two years ago, 2007 NSCA Pro Street Champion Jarod Wenrick purchased a new-to-him ’66 Chevy Nova with intentions of running X275. The Ohio-based racer had taken several years off from racing to manage his business, Value Added Packaging, but missed the thrill of drag racing and decided to get involved in the sport again. His X275 plans never came to fruition, though, as Wenrick wrecked the Nova in an unfortunate accident at Kil-Kare Raceway in Xenia, Ohio during his first pass ever with the car.

“Something unloaded in the rear-end and spun me into the wall,” he remembers. “I walked away unhurt, but I decided to give up on the car after that.” Fate intervened, and not long after, Wenrick recalls that he walked into his kitchen one morning and saw a Post-It note that his daughter had left. On the note was written “never give up.” Wenrick took the advice to heart, and he decided at that moment that he’d rebuild the Nova and resume racing.
“We totally started over and cut everything out of the car. We’re still using the same shell and steel doors, but we went to a one-piece front end, and Tim Lyons at Lyons Motorsports spent a lot of time molding in a factory grill, headlights, and other pieces,” he says.

The Lyons Motorsports team was tasked with a long list of repairs, and Wenrick upped the ante even more when he decided that he’d rather target NMCA Stainless Works Street Outlaw than X275 as originally intended. “I wanted a real car, not a carbon fiber and fiberglass car,” he explains. Tony Bischoff at BES Racing Engines was chosen to supply the 430 CI Chevy motor, and boost was to be provided by a ProCharger F-1X blower. “I went back to ProCharger because of the great drivability and how easy it is to focus on the tree, as well as the consistent power it provides,” says Wenrick, who also ran a ProCharger on his previous Pro Street ’68 Camaro. A Chris Alston gear drive, Rossler Turbo 400 2-speed transmission, and M&M Transmission torque converter were selected for the Nova’s build sheet, while a BigStuff3 system was put on powertrain management duty. In addition to the build itself, the Lyons team will also be responsible for chassis tuning of the four-link car.

A beautiful coat of fresh red paint has been sprayed onto Wenrick’s Nova, and the black vinyl top really makes the car stand out in a crowd. “It’s a unique car – it’s not a Mustang!” Wenrick says jokingly. Only a few more items remain on the To Do list before the eye-catching Nova is ready to run once again.

“There’s going to be a learning curve for me to get comfortable on the 275 drag radial tires,” Wenrick admits. “We’ll run the rest of the season this year with NMCA, but our goal is to get the car competitive for 2016 and for me to be a class leader by then.” Fortunately, he’s got the full support of his family including his wife, Mari, his daughters Makara (17) and Darani (12), as well as his son, Jaran (14) who will take on Crew Chief duties. “Jaran’s a little green right now, but I’m gonna teach him everything he needs to know,” says the loving father with a laugh, and notes that Patrick Barnhill and Jason Lee from PTP Performance will be lending a hand with tuning responsibilities.
Wenrick plans to have the Nova ready to rock in time for the 10th Annual Nitto Tire NMRA/NMCA Super Bowl of Street Legal Drag Racing event at Route 66 Raceway in Joliet, Illinois on July 30 – August 2, 2015.