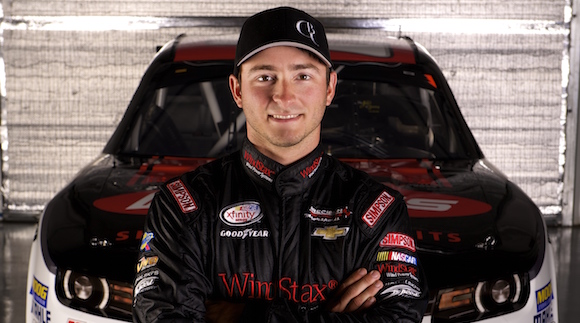 China Grove, NC (September 3, 2015) – Precision Performance Motorsports driver Brandon Gdovic will make his NASCAR Whelen Euro Series debut in Italy next week. The 23-year-old driver from Yorktown, Va. will pilot the No. 46 Fronius Chevrolet Camaro in races on September 12th and September 13th at the Autodromo dell’ Umbria in the central Italian city of Magione.

We are very happy and proud to welcome Brandon and his Precision Performance Motorsports team into the NASCAR Whelen Euro Series,” said Jerome Galpin, president and CEO of NASCAR’s Euro Series. “Brandon is a talented driver who’s had great success on road courses, especially in his recent NASCAR Xfinity Series race at Watkins Glen International. I’m sure he’ll adapt very quickly to our cars. This is exactly where we want to be: building the NASCAR bridge for U.S. drivers to come to Europe and European drivers to go to the United States. This is a long-term project, and I’m sure Precision Performance Motorsports can help us on both sides of the Atlantic.”

Gdovic has 48 NASCAR K&N Pro Series starts, three NASCAR XFINITY Series starts and two ARCA starts. Although the Virginian has not turned laps at the 11-turn, 1.558-mile Italian road course, he’s certainly no stranger to turning left and right. Gdovic is currently piloting the No. 46 Lamborghini Gallardo for Mitchum Motorsports in the Super Trofeo North America Series, where he has four victories in five starts this season.

“The opportunity to race in Italy will be a great experience, and I’m proud that we’ll be representing Fronius in the NASCAR Whelen Euro Series,” said Gdovic, who recently won two road races and finished second in another at Virginia International Raceway. “Anthony Kumpen has helped me get acclimated with the track and the cars, and Jerome has been instrumental in getting me involved with the series and this race. I believe my road racing experience this year will greatly benefit our team. I can’t thank the NASCAR Whelen Euro Series, Fronius and Precision Performance Motorsports enough for giving me this opportunity.”

The trip to Italy marks the first time Gdovic has raced outside the United States. With Fronius on board his No. 46 Chevrolet Camaro, Gdovic will compete in both the ELITE 1 and ELITE 2 categories of the NASCAR Whelen Euro Series.

For over 65 years the name Fronius has stood for intensive research and the constant search for new, innovative solutions. Our state-of-the-art products have received numerous international awards for innovation, environmental stewardship, and best practices. In the field of welding technology, Fronius is a competent partner to the international automotive industry and other metalworking industries where high quality is a major concern. For more information visit Fronius USA Welding on Facebook, WeldFroniusUSA on Twitter, or visit the website at www.fronius.us.