TOLEDO, Ohio (Oct. 17, 2016) – All Chase Briscoe needed to do to secure the 2016 ARCA Racing Series presented by Menards national championship was to power up onto the track at Kansas Speedway in practice. That seemed simple enough, but the season-long pursuit of ARCA’s coveted crown was anything but.

“It’s been a whirlwind for sure,” said Briscoe, driver of the No. 77 Big Tine Ford. “What a learning curve it’s been for me. I had no idea how to save my stuff with these longer races. I’ve never learned more in any one season. The season we had doesn’t come every year…it’s life changing. This Cunningham Motorsports team is like a second family to me.”

It wasn’t just the long season and all the hard work that goes into a championship team. Briscoe is still pinching himself that he ever got the opportunity to begin with. 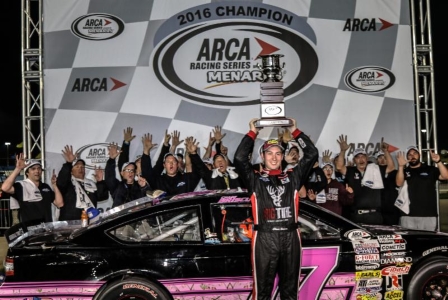 “Last year I was just going to the shop as a volunteer, trying to get my foot in the door. Chad (Bryant/crew chief) was the one guy that took me under his wing. I had no idea what I was doing…I still don’t. I was volunteering my time, catching tires whatever I could do to help. Somehow I landed with a full-time ride. I have no idea how or why. I’m definitely fortunate…just so blessed.”

Briscoe’s journey with Cunningham Motorsports started with two open tests at Mobile and the Nashville Fairgrounds in 2015.

If Briscoe thought it was over, Cunningham Motorsports co-owners Briggs Cunningham and Kerry Scherer saw it differently.

“I’ll be honest…I didn’t know who Chase Briscoe was last year,” Cunningham car owner Kerry Scherer said. “Then, over a two week period, all of a sudden I started hearing his name. We all came to learn that Chase is the complete package. What he’s got, he’s earned…he’s got it all. I saw the likeability right away…then it didn’t take long to see the drivability.”

Briscoe did for Cunningham Motorsports what no other driver has done in the 21-year history of the company – win a national championship.

“I feel like an overnight sensation that took 21 years,” Scherer continued. “This is so special. It’s so hard to win one…that’s why this stands out so much. We’ve tried for so long. Finally getting here just adds to the value.” 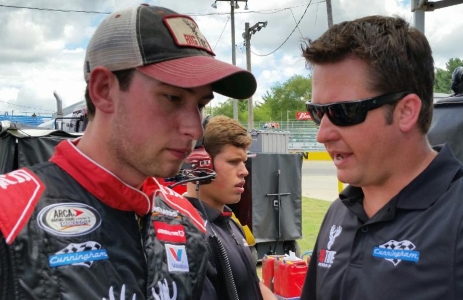 Crew Chief Bryant wrapped up his first championship, yet it was his third Cometic Crew Chief of the Year title.

“This is a season you only dream of as a little boy,” said Bryant. “It’s a huge honor to be the Cometic Crew Chief, especially as champions. I’m just fortunate to get the credit for what’s a total team effort. I’m going to cherish this for a long time.”

Bryant understands how important it was to have Briscoe in the driver’s seat.

“First and foremost, Chase is a person of good character. I didn’t see the talent at first, but after that first test, you could see right away how he was able to hit his marks each lap. We could all could all see what a good person he is…the kind of kid you want to see succeed. But once I saw him test, we all knew that we had something really special.”

Briscoe won a season-high six races beginning with his first at Winchester Speedway in late June.
“When that first win came, I thought to myself, ‘finally’, but in reality it was only my ninth or 10th time on pavement,” Briscoe said.

The win at Winchester started a streak for Briscoe during which the Mitchell, Indiana rookie won four consecutive at Winchester, Iowa, Lucas Oil and Pocono. Briscoe also won in his first mile-and-a-half start at Chicagoland, then wrapped the season with a victory in the Kansas 150 finale Friday night, and the national championship. 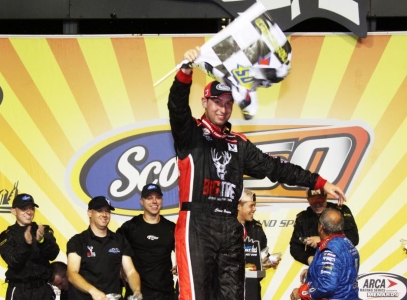 “After that first win, they just kept coming. Looking back now we think we should have 12 or 13 wins. We gave a lot away. I’m just so honored to give Briggs (Cunningham) and Kerry (Scherer) their first championship. It’s a small payment on my end but a great way to pay them back.”

Through it all, Briscoe was virtually unstoppable, earning an impressive 14 top-five finishes and 18 top-10s over the 20-race season, twice as many top-fives as runner-up championship driver Tom Hessert.

Briscoe and the Cunningham Motorsports team will officially be crowned ARCA’s national champions at the championship award banquet at the Indiana Convention Center in Indianapolis Saturday night, December 10.