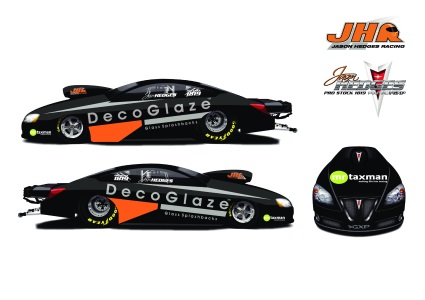 Team owner Jason Hedges is recovering from back surgery and has succumbed to the fact that he unfortunately won’t be physically fit in time for this event.

This partnership will show the father/son combination of Rob and Shane Tucker teaming up on home soil for this one-time deal in Hedges’ DecoGlaze™ Pontiac GXP.

“I’m pumped to get back behind the wheel of a 400 cubic inch carbureted small-block especially in great equipment like JHR has,” Shane Tucker said. “Jason has assembled a first-class operation and we will be doing our best to put the DecoGlaze™ GXP up at the top of the field.”

“I can’t wait to drop the clutch in this bad-ass car,” he added. “It showed great promise running 6.96-seconds at 196 mph off the trailer in Jason’s first outing back in November last year. Dad and I will work with Jason’s team to get this thing where it needs to be. Uncle Dave (Tucker) has been crew chief for Jason for five years now. Dave, along with Justin Gall and Jason from J & D Custom Cabinetry, have given Jason [Hedges] their time and effort at every test and race meeting”.

Shane acknowledges that this partnership couldn’t have come at a better time.

“The timing was perfect for me,” he said. “My Auzmet Architectural business, which is based in both Australia and the United States, has me flying in and out of both countries throughout the year. When Jason approached RTR, it was a good thing for all of us. Jason has the same outlook on business and racing as myself. ‘If you’re going to do it, do it right, as well as look and perform to your very best’”.

“I first met Rob and Janine Tucker the night after I gained my Pro Stock license at Willowbank in 2008,” Jason Hedges said. “They invited me to stay over at their race base and celebrate the successful licensing day. This shows what sort of people they are. I didn’t know them, and there I am in their home that night, having a few drinks and talking Pro Stock. Since that day, the respect for each other has been mutual”.

The friendship between the two race teams grew from there. The Hedges family spent a week in Charlotte (USA) last year at zMAX Dragway’s 4-Wide Nationals with the Tucker’s and was able to experience NHRA Pro Stock firsthand.

Hedges also announced that Mr Taxman is back on board, sponsoring JHR for the closing 3 rounds of the season.

The Santo’s Super Thunder race will be the third round for Pro Stock in the IHRA Australia, 400 Thunder 2016/17 Series. With two further races in the series, JHR are looking to get some valuable data and track time for their team and sponsors.