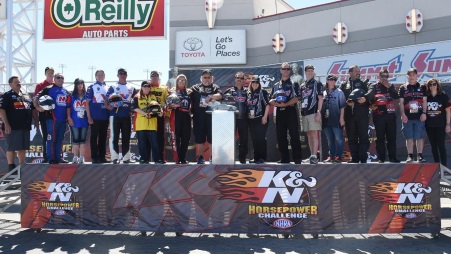 The K&N Horsepower Challenge will be held Saturday, April 1, during the DENSO Spark Plugs NHRA Nationals at The Strip at Las Vegas Motor Speedway. The lucrative event is open to eight drivers, seven of which will be determined by points earned at NHRA Mello Yello Drag Racing Series events. The eighth spot will be decided by the fan vote.

“The racers in the Pro Stock category look forward to the K&N Horsepower Challenge each year to prove who is the best in the category,” said Graham Light, NHRA senior vice president of racing operations. “The specialty race features the top Pro Stock drivers and allows the fans to be involved in the selection process by voting for the eighth finalist.” 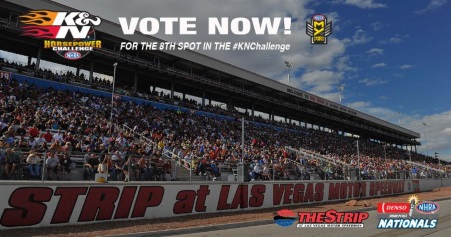 Greg Anderson raced to victory last year in the K&N Horsepower Challenge in an uncontested final round when teammate Jason Line’s car broke on the starting line. Anderson’s Summit Racing Equipment Chevrolet Camaro lost traction at the start, but he was able to cruise down the track to claim his fifth victory in the lucrative Pro Stock all-star event. With the victory Anderson earned $50,000.

Voting is open now and will end on Monday March, 27 at noon Eastern. Fans can go to NHRA.com to vote: http://www.nhra.com/KNChallenge. Fans can vote once and they must have a Facebook page to vote.

The winner of the fan vote will go up against the other seven entries in a three-round shootout in Las Vegas. The champion of the K&N Horsepower Challenge race will win a $50,000 grand prize. The runner-up will receive $10,000 with $3,000 to the two semifinalists and $2,500 to the four first-round finishers. If a driver doubles-up by winning the specialty event and the national event, that driver will win a $25,000 bonus.

Pro Stock points standings can be found at http://www.nhra.com/k-n-horsepower-challenge/kn-points