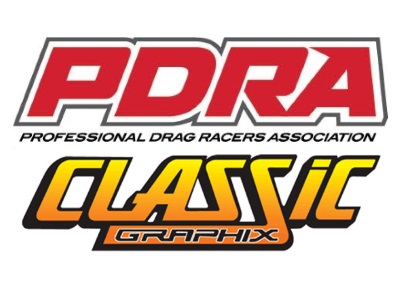 PITTSBORO, N.C. (March 8, 2017): Classic Graphix, the Official Souvenir Provider of the PDRA, is continuing to support the series in a variety of ways. The California-based company will, once again, be at every PDRA event with one-of-a-kind souvenirs, but is also maintaining a sponsor role to support the series’ racers. Classic Graphix is presenting the Low Qualifier Award for both Junior categories, as well as a record-setting bonus for racers in Pro Extreme, Pro Nitrous and Pro Boost. The Classic Graphix ‘Reset the Record’ Bonus will award $1000 to the racer who resets the National ET Record in one of those three categories and leaves the event as the record holder. This Bonus is up for grabs at every PDRA event this season.

“The PDRA is a great organization with wonderful people who race in it and own it,” stated Classic Graphix’ Scott Bathurst. “They give us the opportunity to sell apparel for them, so I want to give something back. I’ve been going to races since I was 10 years old and it’s something I’ve always enjoyed. Resetting the record is a major accomplishment that we’re proud to reward.”

Classic Graphix is a family owned and operated business that started out of the family garage and quickly grew into an industry-leading silkscreening and embroidery manufacturer. More information about the company can be found at www.classicgrahpix.com or shop the PDRA line of apparel and souvenirs.

“We’re excited to be involved with Pro and Top Junior Dragster, as well,” Bathurst added. “They’re the future of the sport. A lot of those kids and and young adults come up and see us at the trailer and can be some of our biggest supporters at the souvenir trailer, so we want to support them, as well. I like the family atmosphere. Just like our business, I like to see the families out here working and having fun together. One day these number one qualifiers in Juniors may be the ones resetting the records in Pro Extreme, Pro Nitrous or Pro Boost.”

From pre-season test results, it looks as though Classic Graphix may be handing out $3000 after this weekend’s season opener at South Georgia Motorsports Park. There is a real possibility for record slashing in Pro Extreme, Pro Nitrous and Pro Boost at the Southern Extreme Nationals. Watch live at www.SpeedVideo.com to see who resets the records ands snags the first Classic Graphix ‘Reset the Record’ Bonus.