PITTSBORO, N.C. (March 8, 2017): The Bracket Bash category the PDRA instituted in 2016 was popular with series followers and local racers, alike. The class will continue in 2017 with exciting new changes. Most notably, the PDRA welcomes Bracket Bash title sponsor Edelbrock.

Edelbrock has a longstanding history and has been a pivotal company in the evolution of drag racing. The California manufacturer is continuing its grassroots support through sponsorship of the Bracket Bash. The company also pays contingency in PDRA.

“Edelbrock has been involved in many different forms of racing since 1938. We’re excited to be part of PDRA’s Bracket Bash series this year. Edelbrock products are used by many top bracket racers across the country, so to sponsor a series like this makes sense for us and gives us an opportunity to connect with local racers,” states Eric Blakely, Edelbrock Director of Advertising.

Founded in 1938, Torrance-based Edelbrock, LLC is recognized as one of the nation’s premier designers, manufacturers and distributor of performance replacement parts for the automotive aftermarket. Edelbrock produces their core products in the United States of America using state-of-the-art equipment in their world class manufacturing facilities. Edelbrock encompasses five locations in Southern California and one location in North Carolina totaling more than 500,000 square feet. For more information, visit www.edelbrock.com 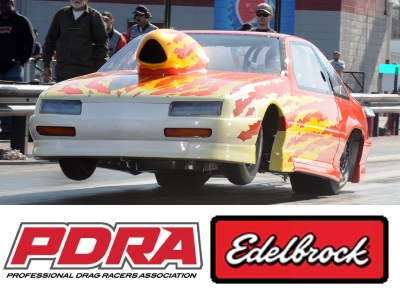