BROWNSBURG, Ind. (March 14, 2017) – Three-time Top Fuel world champion Antron Brown was looking to purchase a Jr. Dragster for his oldest son to compete in NHRA’s youth racing program about four years ago, and in the process was introduced to Hangsterfer’s Laboratories that specializes in the research, development and manufacturer of metalworking lubricants.

That meeting four years ago, has developed into a marketing partnership with drag racing powerhouse Don Schumacher Racing, for which Brown drives the sport’s most successful Top Fuel team of the decade. 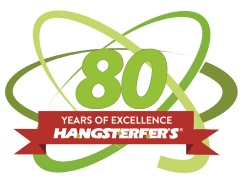 The relationship continues to grow in 2017 as Hangsterfer’s Metalworking Lubricants announced with DSR owner Don Schumacher an expanded partnership that will include a major associate sponsorship role with Brown’s Matco Tools/U.S. Army dragster team along with continued support with its vast array of straight cutting oils and technological expertise for use at Schumacher’s Don Schumacher Motorsports CNC machine shop, a sister company to the racing enterprise located in the same 145,000-square-foot headquarters near Indianapolis.

Hangsterfer’s, founded in 1937 by the late Dr. William Hangsterfer, also is providing major sponsorship for brothers Matt and Zach Sackman and their family’s 200-mph Top Dragster that will compete in NHRA regional and PDRA competition, including this weekend’s NHRA Gatornationals at Gainesville, Fla., when he joins Brown in competition. Matt is a member of Brown’s two-time reigning Top Fuel team at DSR.

Hangsterfer’s Laboratories, which is based in New Jersey, and celebrating 80 years of business in 2017, produces over 300 products for a variety of applications in the metalworking industry.

“We’re a family company so we respect the family aspect of the sport and the Sackman family team,” said Mike Ditzel, Hangsterfer’s Performance Racing Product Specialist whose brother, Randy Ditzel, owns Half Scale Junior Dragsters and introduced Brown to Hangsterfer’s.

“We believe in supporting the sport at all levels,” he added. “We support DSR, the Midwest Jr. Super Series as young racers begin their driving careers. We supported the Sackman brothers, who started driving Half Scale cars in the Junior Dragster ranks and now race NHRA and PDRA Top Dragster. At the sport’s highest level, we support Antron Brown and the DSR Top Fuel and Funny Car teams.”

“It’s an honor to be affiliated with DSR and Antron, and to be able to sponsor Matt and Zach and help them progress through the sport,” said Bill Jones, Hangsterfer’s Metalworking Lubricants vice president. “I’ve been talking to Matt for years and I’ve always told him that we’ll be sponsoring him someday. This year it’s finally come to full fruition. We’ve done a few races every year, and this year it’s the full deal.”