CONCORD, NC. (April 30, 2017) – Terry McMillen and his AMALIEⓇ Motor Oil XTERMIGATORⓇ Top Fuel Dragster made it to their second career final round at the 4-Wides contested this weekend at the zMAX Dragway just outside of Charlotte, North Carolina. Although the team fell short of their first win, McMillen was happy with the results.

“Overall it was a great weekend for our team,” McMillen said shortly after losing in the last round. “There were a lot of first this weekend for us,” McMillen continued. “We got our first round win at the 4-Wides and our first win against Doug Kalitta. Having the support of our marketing partners through all of this means a lot to us. We had Ken Holder from Amalie here this weekend. It’s always good to do well when your sponsors show up.”

“Our team is really coming together and I think when we get into these hot weather races we have coming up, like next week in Atlanta, I think we have a car that everyone is going to want to avoid on Sunday’s.”

This race also marked the one year anniversary of McMillen’s Houston crash that destroyed his car and set the team back from the performance advances they made starting the 2016 season. The 2017 season is shaping up to be McMillen’s best.

“Right now we’re one round behind where we were this time last year, but we’re one car ahead of where we were,” McMillen explained. “Our average qualifying time is 3.799 seconds so far this season and that’s pretty good considering we didn’t even know how to run in the 70’s before this season.”

McMillen gives a lot of credit to crew chief Rob Wendland and crew, Don Schumacher and DSR. “Don Schumacher deserves a lot of credit for the performance of this car and I can’t thank Don and DSR enough for the great car they built for us. Having their parts available to us is a big plus for our program. I think you also have to look at the stability we have with a top notch guy like Rob Wendland and the crew he has but together with Bob Peck and everyone else. These guys and girl have been together for two years now and they’re all really starting to work together like a finely tuned team. We had less than an hour to get back up there for the final round and they gave us the chance we needed to get to race in the finals here. I’m confident it won’t be the last time you see this green gator in the finals this season.”

Terry and team head next to the Atlanta Dragway May 5-7. 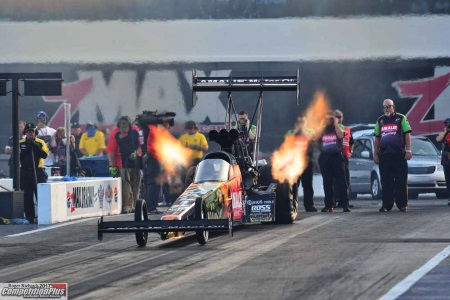