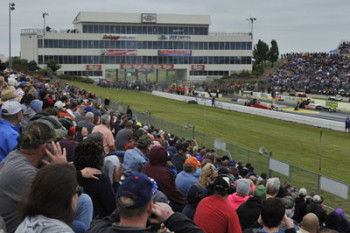 The NHRA Lucas Oil Doubleheader Weekend presented by Aeromotive will feature back-to-back divisional events, Aug. 13-14 (Thursday and Friday) and Aug. 15-16 (Saturday and Sunday), preceded by a test ’n’ tune day, Wednesday, Aug. 12. And with a large contingent of Sportsman racers expected to take advantage of the doubleheader weekend in pursuit of national and divisional championships, NHRA’s world-famous NHRA Safety Safari presented by AAA will be on hand to ensure that the racing surface is in top-notch condition. Safety-Kleen also will be on hand for the event, providing cleanup materials and its familiar oil-containment stations.

“This doubleheader weekend is something that our racers have been asking for, especially because it allows them to save on travel costs,” said Park. “We’re also aware of the rumors about the event and about the facility, and we wanted to send a message to everyone in that area, and to Sportsman racers in general, about NHRA’s commitment to them. The Safety Safari is coming directly to the event from Seattle [after the NHRA Northwest Nationals], which is no small feat considering it’s a 27-hour trip, but we put two-driver teams in place to get them to the facility in time to get the track ready for Wednesday’s test ’n’ tune. They’ll bring their full complement of equipment — our tractors, draggers, Power Bosses sweeper trucks, and spray rigs — and we’ll have five of the full-time Safari members overseeing everything.

“We know that racers from all divisions will be represented at this event because it’s a good fit for racers on their way to Brainerd [the Lucas Oil NHRA Nationals the following weekend] or getting ready for Indy [the Chevrolet Performance U.S. Nationals]. It’s going to be a great race.”

Earlier this year, NHRA made a tremendous team effort in Topeka to stage the annual NHRA Kansas Nationals after the Topeka City Council voted against a resolution that would have allowed the city to proceed with the purchase of the facility. NHRA never wavered in its support of the event and put operational team members on the ground at the facility to make preparations for the race weekend and handled the advertising and promotional campaigns. The event was completed in spectacular fashion with record-breaking runs and a great crowd, and NHRA is showing the same kind of unwavering dedication to the divisional events.

Heartland Park Topeka also will host the Division 5 Summit Racing Series Finals, Sept. 18-20, where more than 600 of the region’s best e.t. bracket racers will converge for the chance to win divisional championships and the opportunity to compete for national championships later this year in Pomona.