Looking to make a big move in the Top Fuel points standings heading into the NHRA Mello Yello Drag Racing Series Countdown to the Championship, J.R. Todd may be heading to an ideal place to get it started.

Fresh off a win at challenging Bandimere Speedway a year ago, Todd is after more success at this weekend’s 36th annual Mopar Mile-High NHRA Nationals in his 10,000-horsepower SealMaster dragster.

Banking on the strong success of his Kalitta Motorsports team in Denver, as well as his own two victories, Todd is sensing good vibes as he kicks off the legendary three-race NHRA Western Swing at Bandimere Speedway.

“I am definitely looking forward to getting back on the mountain,” said Todd, who has seven career wins. “Team Kalitta has always been strong there, and I feel like we have a great shot at doing well there again this year. We have SealMaster back onboard, and I would love to get them their first NHRA win.

“I feel like the success I’ve had at Bandimere has really been due to the good equipment I’ve had there. Now I’m part of a group loaded with talent that knows how to win.”

Robert Hight (Funny Car), Allen Johnson (Pro Stock), and Andrew Hines (Pro Stock Motorcycle) are the defending winners of the event. ESPN2 will provide television coverage of qualifying and eliminations at the event. It marks the 14th of 24 events during the 2015 season, and as the first race of the three-race Western Swing, it signals the start of one last push before the Mello Yello Countdown to the Championship.

It’s also an important time for Todd, who has been solid in 2015 but is still looking for his first win of the season. After stepping into a full-time role for Kalitta Motorsports early last season, he got that breakout performance in 2014 in Denver, winning that race and finishing second in the points standings.

He would welcome another top performance like that. Todd, currently ninth in points, took advantage of every situation last year at Bandimere Speedway. 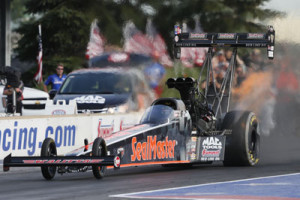 “I remember we blew it up big time in the semi’s against [Larry] Dixon,” said Todd, who beat Brittany Force in the final round in 2014. “The entire Kalitta Motorsports organization was thrashing on our car, and we were pressed for time due to live TV. Luckily, we had a rain delay that bought us time, and we went out there and made our best run in the final.”

That gives Todd plenty of confidence heading to a track that can be difficult to solve. At an elevation of more than 5,800 feet, the Mopar Mile-High NHRA Nationals presents major challenges and forces teams to completely overhaul their dragsters for the unique event.

But challenging or not, Todd knows he needs a strong outing in Denver. He has two semifinal showings in 2015 and is looking for his first final-round appearance of the year, and this weekend would prove to be an opportune time to get one.

“For us, it’s getting down to crunch time, and we need to make a move in the points,” said Todd, who is 42 points ahead of 10th-place Steve Torrence and leads 11th-place Clay Millican by 58 points. “It would be nice to come off the Swing with round-wins and lock into the Countdown headed into the U.S. Nationals.”

Todd will again face off against a loaded Top Fuel field that starts with points leader and defending world champion Tony Schumacher, who won the most recent race in Chicago. Other challengers include Todd’s Kalitta Motorsports teammate, Doug Kalitta; Dixon; Antron Brown and Richie Crampton; who both have three wins this season; Force; Spencer Massey; and Shawn Langdon.

But Todd is locked in on the task ahead in the next three weeks, and that starts with beginning the Western Swing on a good note.

“We definitely want a cushion heading into Indy and to give ourselves a higher starting point in the Countdown,” Todd said. “There are some really good cars behind us in points, so it’s going to be tough to even make the top 10.”

No driver has had more recent success at a certain track than Allen Johnson has had at Bandimere Speedway in Pro Stock. Johnson, the 2012 world champ who won recently in Chicago, has claimed the last three in a row and six of the last eight in Denver. Four-time world champ and current points leader Greg Anderson has had one of the hottest hot rods in the category with four wins this season. Defending world champ Erica Enders also has four wins this season, and Phoenix winner Rodger Brogdon, rookie Drew Skillman, Houston runner-up Chris McGaha, and Vincent Nobile are all expected to be major contenders in the popular factory hot rod category.

In Pro Stock Motorcycle, the Screamin’ Eagle Vance & Hines Harley-Davidson team has had major success in the Rockies and hopes to continue that trend in 2015. Matt Hines, Andrew Hines, and Eddie Krawiec have combined for nine wins on the track. Gainesville winner Karen Stoffer, perennial title contender Hector Arana Jr., who won in Chicago, Atlanta winner Hector Arana Sr., and many more figure to give their best shot in the two-wheel category.