BROWNSBURG, Ind., May 30 — Nolen Racing’s Jerry Coons Jr. had to pit to replace a flat right-front tire on his Nolen Racing USAC Silver Crown car while running fifth in the Carb Night Classic Friday night at Lucas Oil Raceway in Indianapolis (LORI). The Whiteland, Ind.-based team got the tire change accomplished quickly and Coons went on to finish ninth in the race, earning enough points to be shown in third place in the point standings prior to the next event June 16 at Williams Grove (Pa.) Speedway. (Thursday’s Hoosier Hundred at the Indiana State Fairgrounds was rained out.)

Joe Axsom qualified tenth in another Nolen Racing entry at LORI Friday night, but the Franklin, Ind.-based driver was forced to retire early due to mechanical issues. A problem with the car’s ignition system was the likely reason, according to team owner Gene Nolen. Axsom was credited with an 18th-place finish.

The Greencastle, Ind.-based driver passed Justin Grant for fourth place in Turn 1 on the first lap of the race, and held that position until lap 48 when Chris Windom got by. A yellow came out on 51 when Troy Thompson spun. A lap after the restart on lap 62, Coons passed Windom to regain fourth place on lap 63. Windom passed him back on the following lap, pushing Coons back to fifth.

Coons was still running in fifth on lap 73 when he was forced to pit due to a cut right-front tire. He rejoined the field in tenth place. He advanced to ninth on lap 94 after the sixth-place driver, Grant, hit the wall between Turns 3 and 4. That set up a green-white-checkered finish, and Coons brought his car home in ninth place. 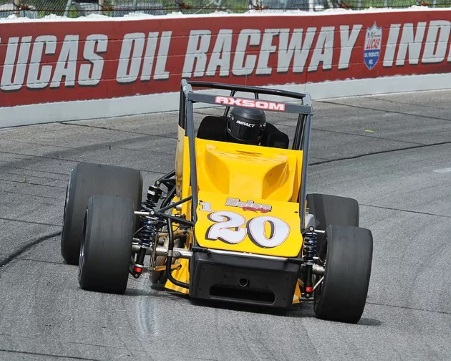 Axsom ran in tenth place for the first five laps. A.J. Russell passed him on lap six to push him to 11th, and he pitted with the mechanical issue on lap seven. He rejoined the race two laps later, but pitted again on lap 16 and retired at that point.

Coons set the fourth-fastest lap of the race on lap two with a time of 21.871 seconds.

Both of the Nolen Racing cars in the Carb Night Classic were Beast chassis with Tranter-prepared Chevy engines.

“We don’t know what caused the flat tire on Jerry’s car,” Nolen said afterwards. “He could have run over some debris.

“Our guys have really been working hard to prepare for this week, and I’m proud of all of them,” he added. 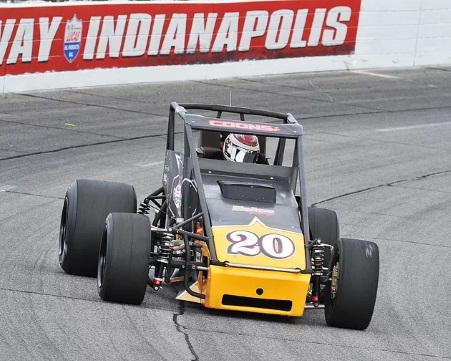 The team’s complete schedule can be found on its Web site at nolenracing.com and its Facebook page. It’s also on Twitter. For information on marketing partnerships, contact Restart Communications at LKMRestart@gmail.com.

USAC’s Web site is at usacracing.com. More information on the Hoosier Hundred and the Carb Night Classic is available at TrackEnterprises.com. 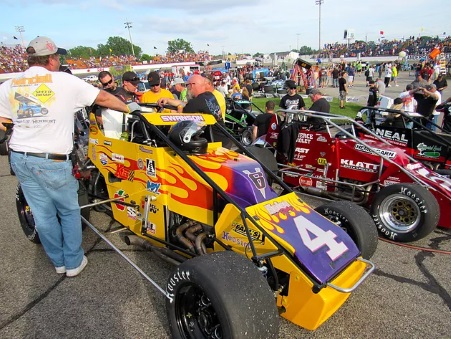 Kody Swanson’s Nolen Racing #4 on the grid before the start of Saturday’s Little 500.

ANDERSON, Ind., May 30 — Nolen Racing’s Kody Swanson led the most laps (183), set the second-fastest race lap, and at times had a substantial lead of over 6 seconds during Saturday’s 69th Pay Less Little 500 presented by UAW GM at Anderson Speedway. Unfortunately, the eventual winner and Swanson had contact 31 laps short of the finish, causing Swanson to spin in Turn 1. Swanson, a native of Kingsburg, Calif., regrouped to finish fourth in the 33-car contest on the quarter-mile oval that is billed as the greatest asphalt sprint car race in the world. The 500-lap race was staged before a capacity crowd, as tickets were sold out well before starting time.

Swanson, the defending race winner, started third. He quickly moved into second place behind polesitter Caleb Armstrong, and ran in that position until shortly before lap 100, when Kyle Hamilton got by to push him back to third. Hamilton and Swanson then both passed Armstrong in the next couple of laps. Swanson was about 1.426 of a second behind the leader when the red flew on lap 122 when Aaron Pierce flipped on the backstretch.

Swanson remained in second place, ranging from about 0.2 of a second to 0.8 of a second behind Hamilton, until he pitted during a yellow flag for Mark Hall’s spin in Turn 4 on lap 192. That dropped him to ninth place, but he moved into seventh on lap 214 by passing both Hamilton, who had also made a pit stop, and Travis Welpott. Meanwhile, Brian Gerster led one lap before Shane Cottle took the lead on lap 196.

Swanson was sixth by the halfway point, but one lap later he moved into fourth by passing both Bobby Santos III and Tony Stewart. He got third by passing Jacob Wilson shortly after a restart on lap 275. He passed Armstrong for second place on lap 284, and took the lead from Cottle on lap 285.

At that point of the race there were less caution flags, and Swanson was able to build up a 3.696-second lead over Santos with 100 laps to go. He had extended his advantage to 6.914 seconds by lap 440. Ten laps later Hamilton passed Santos for second though, and Hamilton was able to draw within 1.875 seconds of Swanson by lap 460. The pair made contact in Turn 1 on lap 469, with Swanson spinning to bring out the 12th and final caution flag. That dropped him to fifth place, but he passed Armstrong for fourth around lap 485. He finished in that position, two laps down, which was the same number of laps recorded by the third-place finisher, Stewart. 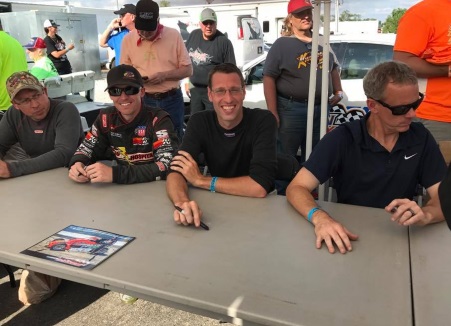 From left to right: Kody Swanson, Shane Hollingsworth and Jerry Coons Jr. at an autograph session before the start of Saturday’s Little 500.

Nolen Racing’s Jerry Coons Jr. started seventh and quickly moved into sixth place. The Greencastle, Ind.-based driver ran in sixth or seventh until he moved into fifth on lap 117. He got fourth place around lap 124, where he ran comfortably between Santos and Chris Windom. He remained in fourth until he pitted under a yellow flag around lap 170 after Davey Hamilton Jr. stopped in Turn 4. There was a problem changing one of his car’s tires during that stop, which pushed him back to 14th place.

Coons was 13th on lap 200, 11th by lap 240, and back in the top 10 by lap 244. He passed Micky Kempgens for ninth place around lap 251, but on lap 263 Swanson made contact with him in Turn 1 as they were both passing a lapped car, causing Coons to spin. His car left on the hook, its day done, and his official finishing position was 20th.

The third Nolen Racing entry was driven by Shane Hollingsworth of Lafayette, Ind., who started 24th. He passed three cars in the first 10 laps to move into 21st position, but around lap 34 he was dealing with debris that had wedged up around one of his tires, causing him to drop to 29th position. He had regrouped back to 22nd by lap 90 and he was 21st on lap 100 and 20th on lap 150. He was able to advance to 13th by lap 170 before he retired with 192 laps complete. He was scored in 23rd place in the final rundown.

The team’s complete schedule can be found on its Web site at nolenracing.com and its Facebook page. It’s also on Twitter. For information on marketing partnerships, contact Restart Communications at LKMRestart@gmail.com.

Kody Swanson: “We had a really good race car tonight, and I felt like we had a real chance to win. Our car was good high or low, and maybe we just didn’t catch the right breaks tonight. I feel bad for the team; I would have really liked to get this car to Victory Lane for them. I’m thankful for the opportunity to have driven Gene Nolen’s #4, and for all of the hard work that everyone put in to give us a chance to win this race.”

Jerry Coons Jr.: “My teammate tried to make it three wide when I was going around a lapped car, and there was contact. My car was good. We were just biding our time until the finish. We also had a problem with the right-rear wheel on our pit stop, but we had a good car.”

Shane Hollingsworth: “Some debris got caught in my right-front tire, and I was dragging it around. We also had a fuel pick-up problem. Also, when we changed tires, one of the nuts seized up. We had some problems, but the car was fast.”