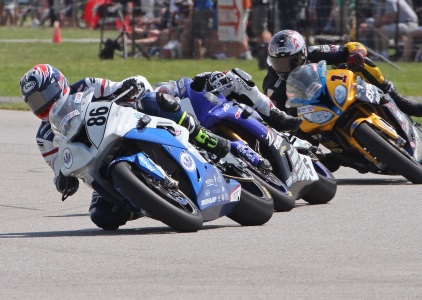 Collingwood, ON CANADA – June 12, 2017 – The 2017 MOPAR Canadian Superbike Championship’s (CSBK) first-ever visit to Grand Bend Raceway, aptly titled the Battle By The Beach, proved to be a race many fans will not soon forget. With consistent improvements throughout the weekend it seemed Young was poised to upset the defending champion’s admirable 15-race win streak.

On Saturday Young put in a noble effort during the Dalton Timmis Insurance SuperPole claiming second spot on the grid thanks to a 1:03.459 from his Scot-Build Developments BMW, just 0.259 seconds back from the top qualifier.

Increasing temperatures and strong afternoon wind guests coming off the shores of Lake Huron for the last two days were certainly going to play a factor in Sunday’s feature Pro MOPAR Superbike race. During Sunday’s morning warm up session Young seemed to find his pace early and topped the charts with the fastest time.

In front of an enthusiastic crowd of race fans Young took his spot on the grid for what was sure to be an exciting and unpredictable race. He bolted off the line into the first corner in third place for the 20-lap feature. The current champion Jordan Szoke jumped to the front of the three-rider pack with Young quickly closing the gap on the second-place rider Bodhi Edie.

Just prior to the midpoint of the race Young made his move to secure second spot. The hungry pilot from Collingwood Ontario began to nibble away at Szoke’s lead and on the 11th lap he was able out-break Szoke for the lead on the back straight.

Edie made a pass on Szoke and was now trying everything to pass Young. This was the battle that race fans had come to see with a historic moment in the making.

With 2 laps to go, Edie made a daring pass for first rubbing bodywork which resulted in Young and his Scot-Build Developments BMW S1000RR launching skyward which triggered a red flag to allow the medical team to tend to the motionless rider.

Amidst the medical team’s comprehensive examination Young gave a thumbs up to reassure his team, fans and family that he was fine. With some assistance Young stood up and began his walk back to the grandstands which was warmly acknowledged by the Grand Bend crowd.

Understandably disappointed Young commented: “I’m fine, really – just upset. My BMW S1000RR was set up perfect for me and the track conditions.” He said “I have a ton of respect for Jordan, but I wanted to be the guy who finally beat him. I’m happy for both Bodhi and his team, but my guys deserved to celebrate a win for all their hard work.”

Thanks to Young’s AXO leathers and Arai Helmet he’ll be ready for Round 3 of the MOPAR Canadian Superbike Championship at Autodrome St-Eustache near Montreal on June 23-25.

This past weekend Young also participated in a test of a 360 Degree Track Lap video around the Grand Bend circuit which can be viewed here: https://youtu.be/X3qOLtGfVLk

The 24 year old pilot of the #86 BMW S1000RR is also a proud “Laps for Muscular Dystrophy” (Laps4MD) rider who’s pledged to donate $1 for every lap he lead this season. These donations go to Muscular Dystrophy Canada to help make a difference in the lives of over 50,000 Canadians affected by a neuromuscular disorder.

To keep up-to-date on Ben Young throughout the year visit;www.BenYoungRacing.com, www.facebook.com/BenYoungRacing and on Twitter and Instagram: @benyoung_86.