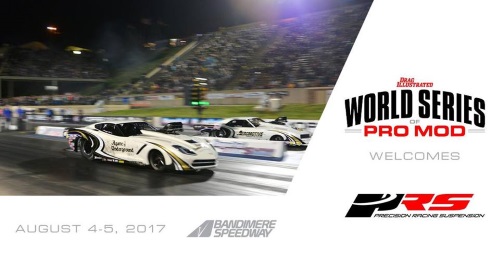 MORRISON, Colo. (June 30, 2017) – The Drag Illustrated World Series of Pro Mod announced today that Precision Racing Suspension and Penske Shocks have been named the title sponsors for the private test session for the biggest and richest race in Pro Mod history.

The two-day test session will give the all-star lineup of Pro Mod drivers the chance to get their cars acclimated to competing at an altitude of nearly 6,000 feet. With a winner-take-all prize of $100,000 being awarded, the test session is also an opportunity to make sure the cars are locked in to deliver thrilling performances during Saturday’s main event.

“When the stars and cars roll into Bandimere, we want the fans in attendance to see them at their absolute best,” Drag Illustrated Editor-in-Chief Wes Buck said. “Precision Racing Suspension and Penske Shocks have stepped up to make this test session a reality and we’re super excited about it. Very few of these competitors have raced on the mountain (at Bandimere) and with all this on the line, you want to see all of them making great runs. With this pressure and on this kind of stage, you want everyone to perform at their best, and we’re happy to put on this test session and let our racers get ready for the biggest and richest Pro Mod race in the history of the known universe.”

Penske Shocks and Precision Racing Suspension are a major name in both the Pro Stock and Pro Mod ranks, with top names in both classes relying on them for continued success. Seeing the massive growth of the Pro Mod class and the impressive momentum the World Series of Pro Mod event has built, both companies jumped at becoming a sponsorship partner for the inaugural race.

“The class has never been stronger and the competition level shows that, and we’re definitely excited to see this kind of event come together,” said Adam Lambert of Precision Racing Suspension. “We like seeing Pro Mods get the recognition they deserve and we’re definitely happy to be a part of this event. A bunch of the cars competing have never driven in altitude like that and the test session will open up a lot of eyes. But by the second day big numbers will start to get put up and I wouldn’t be surprised to see some of the really big numbers on Friday.”

Of course, in continuing with the theme of the weekend where the scoreboards will be turned off during qualifying, they will be off during testing, giving no indication of what others are running during the test session. Race control will also be closed, ensuring no testing numbers will be leaked prior to the event.

“With this much money on the line, that’s something we take very seriously,” Buck said. “Being that we’re announcing the first-round pairings on July 5, you can bet your butt competitor A will be watching competitor B and vice versa during testing. I think having this test session may actually intensify things for the race.”

The intensity level is already expected to be at a fever pitch, starting with Friday’s Aeromotive Wild Card Shootout, which awards the winner $10,000 and the final spot in Saturday’s main event. The first 14 spots were invite-only, with the 15th spot coming via fan vote.

“I think what the test session does is ratchet up the intensity,” Buck said. “I think when you allow teams to test for two days, it just makes the racing even better. Everyone is going to roll up on Friday with bad-to-the-bone hot rods, knowing what it takes to make a good run. With stakes this high, you want to see everybody going to the starting line fully prepared. You want to see great side-by-side action with everyone pushing their cars to the limit.”

Lambert, for one, can’t wait to see the action unfold, especially if competitors take full advantage of the two days of testing.

“I think it’s going to be an absolute slugfest,” Lambert said. “It’s going to be exciting to see everyone battle it out for that big stack (of $100,000).”

If interested in taking part in the test sessions, please contact Nate Van Wagnen at (440) 986-1480 or e-mail wes@dragilustrated.com.