After 27 years behind the wheel, with stints in the IHRA and NHRA, the second-generation racer notches his 100th-career Top Fuel start this weekend at Route 66 Raceway. The Fallen Patriots NHRA Route 66 Nationals Presented by K&N Filters also represents the Chicago-based Rust-Oleum Rocket’s first start of 2017.

“This will be our 72nd NHRA National event,” Zizzo said. “It will be our 100th event in general bringing our Top Fuel car to the race track. That’s pretty spectacular. A lot of good statistics. I’ve been driving for 27 years now. That’s a long time. I gotta tell you, when we suited me up in the shop (last week) to get me in the car to see if I still fit in there because I’m getting fatter by the moment, I was exhausted! Just getting in the car, I was exhausted!” 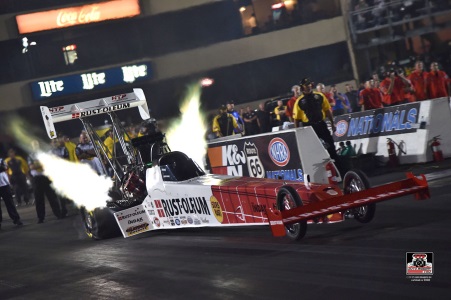 Over the course of that time, Zizzo has seen many crew members come and go, but his core group has been with him for more than ten years with Clutch Specialist Tony “TS” Smith having been with Zizzo Racing for 25 years.”Pretty impressive!” Zizzo said. “I don’t think that has happened very often in the sport of drag racing where you see a lot of team members come and go. But not Tony Smith! If it weren’t for Tony Smith, we probably wouldn’t be racing Top Fuel for the past 15 years.”

Although the Rust-Oleum Top Fuel team has been off the track since last year’s US Nationals, that doesn’t mean they’ve been dormant. In fact, TJ has been working with the track since the offseason to help promote this event, a favor that has been, at times, painful.

In 2016, Zizzo and his crew laid down personal bests at nearly every event in which they participated, culminating in a 3.792-second pass at 322.34 mph at Sonoma. It was important for the team to get past a rough 2015 and after a solid 2016, only minor tweaks were made to this year’s program.

“I want to have a strong running car by Rd. 1 of Eliminations,” he said. “I think that is something that should be a goal. Sure, I would like to come out swinging, but let’s face it; it’s been 10 months. Going into last season, we made a lot of changes going into 2016 and we continued to change throughout the season in 2016 with a bunch of career-best passes. Almost every time we stood on the gas last year, it was a career-best run.

“We decided to take that information and just polish what we have, make some small, incremental changes so we can continue where we left off last year. I don’t expect to run a 3.77 out of the box at Joliet, but by E1, we want to have a good running race car again.”

TJ is also very excited to have Rust-Oleum return to Zizzo Racing this season. Based in Vernon Hills, Ill., the company not only helps Zizzo’s 10,000-horsepower Top Fuel dragster get to the track, but also works with TJ off the track as well.

“It’s a true partnership and not just a sponsorship,” he said. “We work next to their chemists, their sales force, their marketing department all the time trying to come up with new and better products. We work just as hard for them off the race track as on the race track.”

Nitro Cakes! Once again, TJ is cooking up his famous Nitro Cakes at the Rust-Oleum pit area Saturday morning from 9-11 a.m. Fans and media are invited!

Zizzo in the Media: TJ’s dad and Zizzo Racing team owner, Tony Zizzo, was featured in a recent Drag Illustrated article. The Top Alcohol veteran discusses his history along with his new plans behind the wheel.

Zizzo and the Rust-Oleum Rocket hit the track for Q1 Friday at 6 p.m. CDT with the second run scheduled for 8:30. Saturday’s nitro qualifying is slated to start at 4 p.m. with the final round expected to start at 6:45. Pre-race ceremonies kick off Sunday morning at 11. The Fallen Patriots NHRA Route 66 Nationals Presented by K&N Filters airs live Sunday on FS1 at 2 p.m. CDT.

Fans of TJ Zizzo and Zizzo Racing can find updates and photos of the Rust-Oleum Top Fuel team by checking out ZizzoRacing.com, Twitter at @ZizzoRacing, Instagram at @TJZizzo, and Facebook.com/TJZizzo.