DENVER, Colo. (July 23, 2017) – The heart and soul of KB Racing is Ken Black, the Las Vegas-based long-time Pro Stock team owner who drew together a group that is about more than the business of winning – it’s about family. Black and his wife, Judy, don’t make it to every race on the NHRA Mello Yello Drag Racing Series tour, but they were there in Denver this weekend for the Mile-High NHRA Nationals.

Although his team did not leave with the trophy, the KB Racing patriarch was smiling on Sunday afternoon as he watched Bo Butner wheel one of the three team cars to the final round at what may very well be the most challenging race on the tour. His Summit Racing Chevrolet Camaro drivers – reigning and three-time Pro Stock champion Jason Line and four-time world champ Greg Anderson – were progressively quicker every run down the racetrack. After a very close match between the teammates in the second round, Line advanced to the semifinals, while Anderson locked in his position in the NHRA Countdown to the Championship playoffs. 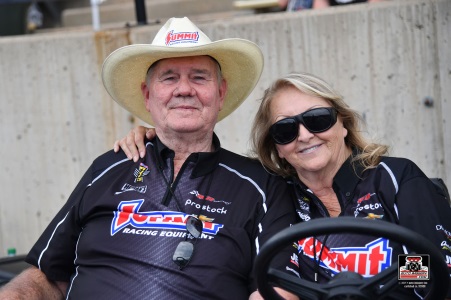 “It was a good day, especially after qualifying,” said Black, noting that Anderson qualified No. 4, Line No. 5, and Butner No. 9. “We weren’t sure how it would turn out, but the guys sure stepped up. That makes the trip home a lot better.”

The team knew it was a risk, but they opted not to test at Bandimere Speedway prior to the event, and instead used their resources elsewhere in preparation for the stretch of three races in a row out West, across the country from their race shop in Mooresville, N.C.

The thin air at high altitude creates a challenge for the naturally aspirated engines, but it is one with which Team Summit is familiar, and the group had enough faith in their team that they debuted a new 2017 Jerry Haas-built Chevrolet Camaro with Butner behind the wheel. 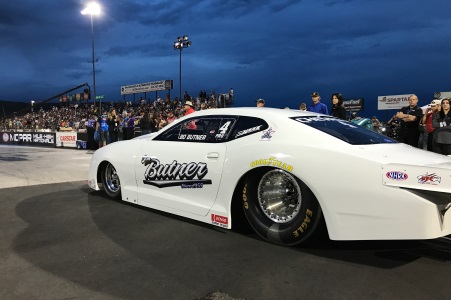 Butner achieved the remarkable when he took down Allen Johnson in the first round on a small but effective holeshot, 6.995-seconds at 197.36 to Johnson’s 6.995, 196.87. Johnson had been to the final round in Denver each year since 2006, and has been known as “King of the Mountain,” but fate was decided when Butner recorded a .020-second reaction time to his opponent’s .033.

The final round pitted Butner against friend and fellow Sportsman racer Drew Skillman, the driver he last met in the semifinals in Chicago. Butner was out of the gate with a threatening .010-second reaction time in their late afternoon meeting, but Skillman surged ahead for a 6.916, 198.15 victory over a 6.953, 198.88.

“I woke up this morning and told Randi Lyn [Butner’s fiancé], you know, if we go a round or two, it’ll feel like we won the race,” said third-year Pro Stock driver Butner, who has a grip on the points lead and has collected three wins in six final rounds so far this season. “We started from scratch with the new car, and we had some new car blues in qualifying, but it turned out pretty good.

“As long as Ken and Judy are happy, we’re happy. They’re so awesome, and I could not even begin to think about doing this without them. I wouldn’t want to – this is such a great team, and there is no other team I’d want to be with. Ken Black probably has this in his heart and in his blood more than me, which is bad. But they’re just great people, and I’m glad he’s happy.” 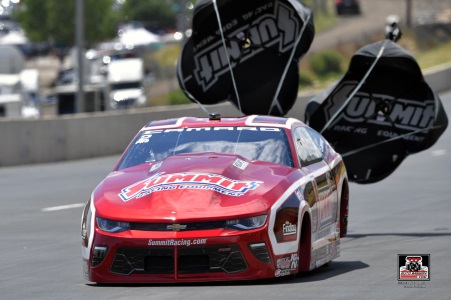 Anderson locks in a spot in Countdown
NHRA’s Countdown to the Championship, the six-race playoffs that will determine the 2017 Pro Stock Mello Yello Series champion, will begin in Charlotte in September. There are just four races left to gain points and secure a position as one of the top 10 drivers who will be afforded the opportunity to battle for the title.

Butner was locked in entering the event, and Anderson secured a position when he scored the victory over Jeg Coughlin Jr. in the first round. The driver of the red Summit Racing Chevrolet Camaro was .017 at the tree and utilized a 6.979, 197.31 to beat a tire-rattling 10.316 from his opponent.

“Since we didn’t test, we knew we were going to have to learn from every run we made down the racetrack, and we were going to have to build on each run,” said Anderson, currently No. 2 in the Pro Stock points. “We did that. We got faster, but I just needed a little bit more. It was a good race with my partner, and our Summit Racing Camaros ran darn near identical, but he got the win. I didn’t. That’s the long and short of it, and it didn’t work out, but we pack up and move on to Sonoma.

“It’s cool to be able to check off securing a spot in the Countdown, because you can’t win the championship if you don’t qualify for it,” Anderson continued. “We get to check that off, but I’m not going to lie. That wasn’t at the front of my mind today. I wanted to win the race. It was exciting, though, to learn and go forward. That’s a learning experience that’s fun for us. It’s a challenge every time we go down the racetrack to try to make the racecar run better. When that happens, that’s a great feeling.” 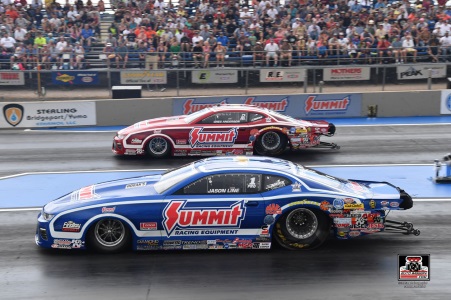 Line a steady force as Western Swing kicks off
In each of the most recent three NHRA races, Line has advanced to the semifinals. Currently No. 4 in the Pro Stock standings, his Summit Racing Chevrolet Camaro was better each round in Denver, and Line was on his game as a driver in the first two rounds to aid his cause.

“All in all, this was still a decent day for us,” said Line. “Especially since we didn’t come here to test. After first round, having all three of our KB Racing cars win, I felt pretty good. We salvaged a decent weekend out of it, and it was fun to make sure the Dodge [Allen Johnson] didn’t win. I enjoyed that moment. Nothing personal against AJ because I love the guy, but it was fun to see Bo beat him.”