SONOMA, Calif. (July 25, 2017) – Terry McMillen, driver of the AMALIE® Motor Oil XTERMIGATOR® Top Fuel dragster has made some unusual promises in the past, but at this weekend’s 30th annual Toyota NHRA Sonoma Nationals, McMillen has reached a new level.

“I think the first thing I’m going to do when I get there is kneel down and kiss the track,” McMillen said as he traveled across Nevada enroute to Sonoma. “We had a rough weekend in Denver. We just couldn’t seem to get a handle on the altitude at the Mile High Nationals. So, Sonoma’s sea-level conditions will be a welcome site for me. I can’t wait to get this car back to the set up our crew chief Rob Wendland has worked so hard on that has had us competitive all year long.”

McMillen holds the eighth spot for The Countdown with just four races remaining to secure a spot in the Top 10. 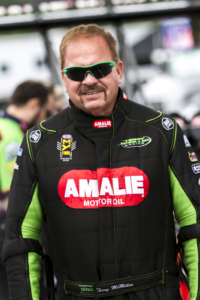 “We’re looking at this and feel like we have to find at least three more round wins between now and Indy,” McMillen explains. “Traditionally we always seem to find a race on the Western Swing and do well. Even then, we always seem to come up a point short after Indy. I’m not sure three more round wins will be enough to secure a spot in the Top 10, but that should get us in the mix. Every little point, every round win counts, our AMALIE crew is going to do whatever it takes to get us there. An event win sometime in the next month would go a long way as well.”

As summer continues to countdown to the NHRA U.S. Nationals in Indianapolis Labor Day Weekend, McMillen finds himself in his usual fight for a spot in the Top 10. This will be his strongest position in the standings at Sonoma, but one that does not leave a lot of comfort room for the Elkhart, Indiana team owner and driver. McMillen has a small lead over Scott Palmer, Troy Coughlin, Jr. and Shawn Langdon, who are all within reach of each other vying for a spot in The Countdown.

“It’s really going to get interesting over the next few races,” McMillen continued. “We all control our own destiny at this point. That includes our team. We are kind of leading our pack right now and the only way to continue to do that is to go out there and beat the best to stay where we are. I’m as confident as I have ever been at this point in the season and can’t wait to get things started in Sonoma.”

The Toyota NHRA Sonoma Nationals will feature two rounds of pro qualifying at 4:15 and 7 p.m. on Friday, July 28, and two final rounds of qualifying on Saturday, July 29, at 1:10 and 4:20 p.m. Final eliminations are scheduled for 11 a.m. on Sunday, July 30. The event that will be televised on FS1, including live final eliminations coverage starting at 1:30 p.m. (PT) on Sunday, July 30. It marks the 15th of 24 events in 2017 and the second of three stops on the NHRA Western Swing. 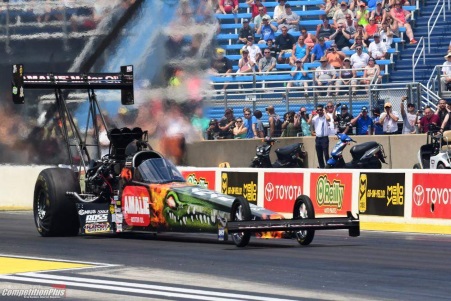 Photo courtesy of Competition Plus via Terry McMillen Racing