As far as title defenses go, reigning Funny Car world champion Matt Hagan’s could not be much better through the first half of the 2015 NHRA Mello Yello Drag Racing Series season. 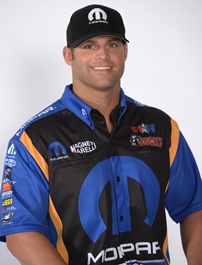 Hagan has posted four victories and holds a commanding points lead in a star-studded class, making it a much more enviable scenario than his last title defense when the two-time Funny Car world champion failed to qualify for the Mello Yello Countdown to the Championship after winning the 2011 world title.

Aside from completing his 2015 season with his first back-to-back championship, Hagan’s to-do list also includes a few other important items. Near the top of that list is driving his 10,000-horsepower Mopar Express Lane/Rocky Boots Dodge Charger R/T to the winner’s circle for the first time at this weekend’s 35th annual Mopar Mile-High NHRA Nationals at Bandimere Speedway.

“Obviously this is a huge race for Mopar and they’re one of my primary sponsors, so this is an event I want to win really bad for them,” Hagan said. “I just haven’t done it yet. It’s so tricky and you never know what you’re going to get with the challenges of this track and race. But everybody is in the same boat and I would love nothing more than to win it this year. I’m very blessed to have sponsors like Mopar and Rocky Boots, and it’s a great fit for us. ”

J.R. Todd (Top Fuel), Robert Hight (Funny Car), Allen Johnson (Pro Stock) and Andrew Hines (Pro Stock Motorcycle) are the defending winners of the event. ESPN2 will provide television coverage of qualifying and eliminations at the race, which kicks off the legendary three-race Western Swing. It is the 14th of 24 NHRA Mello Yello Series events during the 2015 season.

With the Mello Yello Countdown to the Championship playoffs also looming, Hagan simply wants to maintain what has already been a remarkable regular season. The 18-time event winner has posted victories in Pomona, Phoenix, Englishtown and Bristol, finishing as the runner-up at the most recent event in Chicago.

The Christiansburg, Va. native has already matched his win total from his championship season a year ago, but just as importantly has posted impressive performances no matter the weather conditions. That could bode well for success this weekend in Denver, which presents a challenge like no other race on the NHRA circuit.

With an elevation of more than 5,800 feet, racing at Bandimere Speedway is never an easy task. But Hagan is in prime form and he believes his team, led by crew chief Dickie Venables, is capable of conquering the “Mountain” for the first time.

“If I have any shot of getting it done this is going to be the year,” Hagan said. “We’ve put on a good (title) defense this year, and up to this point we’ve raced well and raced smart. We’ve capitalized on some mistakes and had some luck as well. But one mistake and things can change quickly. You just have to make good decisions and feel comfortable in the car. That confidence from my crew chief gives me confidence as a driver. Hopefully we can have that momentum built up and it all rolls downhill from there.”

Hagan was referring to this weekend, but also the rest of the season in a loaded Funny Car field that features a host of challengers, including Don Schumacher Racing teammates Ron Capps, who is currently second in points, Jack Beckman and Tommy Johnson Jr., who beat Hagan in the final round in Chicago.

Bandimere Speedway has also been a Funny Car favorite for John Force Racing’s stable of drivers throughout the years with a combined 11 wins among three drivers. John Force, a 16-time world Funny Car world champion, has six wins at Denver and teammate Hight has three victories. Other Funny Car stars who are expected to contend for the victory at Denver include Del Worsham, Alexis DeJoria, two-time race winner Cruz Pedregon and Tim Wilkerson.

“This sport has, hands down, been the most humbling I’ve been a part of,” Hagan said. “You can do it all right and still lose. But I’ve got a great car underneath me and it all comes down to my crew chief and team. To come out and after a championship like this is huge, but you still have to prove it during the Countdown.”

Hagan is certainly up for that challenge, but wants to keep his strong run going. That means not letting up during the Western Swing, running well in Denver and entering the Countdown to the Championship on a high note.

“We want to carry that momentum with us,” Hagan said. “We had a big points day in Chicago and we definitely want to keep all the momentum going over the next four to five races. In Denver you have to try some stuff and see if it works.”

No driver has had more recent success at a certain track than Pro Stock’s Johnson has had at Bandimere Speedway. Johnson, the 2012 world champ who won the most recent event, has claimed the last three in a row and six of the last eight at Denver. Four-time world champ and current points Greg Anderson has had one of the hottest hot rods in the category with four wins on the season. Defending world champ Erica Enders has four wins this season and Phoenix winner Rodger Brogdon, rookie Drew Skillman, Houston runner-up Chris McGaha and Vincent Nobile are all expected to be major contenders in the popular factory hot rod category.

In Pro Stock Motorcycle, the Screamin’ Eagle Vance & Hines Harley-Davidson team has had major success in the Rockies and hope to continue that trend in 2015. Matt Hines, Andrew Hines and Eddie Krawiec have combined for nine wins on the track. Gainesville winner Karen Stoffer, perennial title contender Hector Arana Jr., who won in Chicago, Atlanta winner Hector Arana, two-time world champ Matt Smith, alligator farmer Jerry Savoie and many more figure to give their best shot in the two-wheel category.