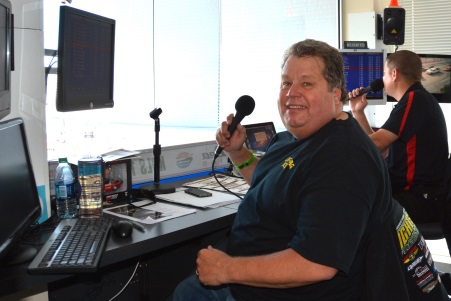 MORRISON, Colo. (August 1, 2017) – Veteran drag racing voice Al Tucci has been named the official announcer of the world’s biggest and richest Pro Mod race in the history of the known universe, this weekend’s Drag Illustrated World Series of Pro Mod at Bandimere Speedway.

Owning one of the most recognizable voices in the sport, Tucci is closing in on three decades of announcing some of the top Pro Mod races in drag racing history. With $100,000 going to the winner and an all-star list of Pro Mod drivers competing this weekend in Denver, the chance to be part of history was something Tucci didn’t want to miss.

“I’m flattered and humbled that Wes (Buck) and the people involved asked me to do it,” said Tucci, who has been the announcer for the likes of the PDRA, NMCA and ADRL. “It’s going to be a phenomenal race and this will be one of the greatest, if not the greatest, Pro Mod race you’re ever going to see. People will be talking about this race forever.”

Excitement for the World Series of Pro Mod continues to build at an impressive rate, with testing slated to begin on the mountain on Tuesday. The Aeromotive Wild Card Shootout takes center stage on Friday, with the winner earning $10,000 and a spot in Saturday’s main event.

Drag Illustrated Wes Buck Editor-In-Chief knew the race needed someone who could bring the type of energy the inaugural race needed from an announcing standpoint. That’s where Tucci entered the picture.

“For me and for us, it made perfect sense to have a big, booming voice and a colorful voice like Al for the inaugural World Series of Pro Mod,” Buck said. “We needed someone to bring the excitement. It’s a perfect fit for us. With the celebrity cast of drivers for the event, it’s only fitting we have a true celebrity announcer. We have that with Al.”

Buck is also confident Tucci will handle the aspects that will be different from your typical race weekend with flying colors.

“There’s some unique parts of this race that will make it challenging for a race announcer,” Buck said. “I knew Al had the necessary gift to keep the fans excited and entertained without some of that critical info. He’s happy to entertain, talk to the drivers and stir the pot a little bit.”

Buck was referencing the race’s unique set-up, which includes the scoreboards being shut off. Drivers will instead have shakedown runs, meaning the announcer won’t be able to give away any numbers during the run.

It makes for a different approach when it comes to announcing, but the uniqueness of the race is what first drew Tucci to the event. With the scoreboards shut off and Friday’s winner earning an automatic shot into the main event, along with the $100,000 prize on the line, Tucci is prepared for some incredible action over the weekend.

“I love what they’re doing with the format,” Tucci said. “It’s going to work so well. You’re going to build up all this energy on Friday and then you can’t wait until Saturday night. When you put a number out like $100,000 and have the best guys in the country coming, it’s like you set the Thanksgiving table and didn’t forget the cranberry.”

ABOUT WORLD SERIES OF PRO MOD
On February 8th, 2017, Drag Illustrated Media announced it will venture into the world of race promotion this summer. The Drag Illustrated World Series of Pro Mod presented by One Cure and J&A Service, August 4-5, 2017, will feature the best drivers and teams that legal Pro Modified racing has to offer. The first-of-its-kind, $100,000-to-win, winner-take-all event will be held at Bandimere Speedway near Denver, Colorado. The race weekend will also include the Aeromotive Wild Card Shootout, the MagnaFuel Pro Star 16 and Quick Star 16 Shootouts, and the JR Race Car 7.90 Shootout. For more on the World Series of Pro Mod, visit www.worldseriesofpromod.com.