SEATTLE (August 6, 2017) – Terry McMillen logged five round wins in the last two races, including a holeshot final round loss to Antron Brown in Seattle. McMillen’s AMALIEⓇ Motor Oil XTERMIGATORⓇ Top Fuel Dragster posted a 3.772 to Brown’s 3.776 for the close race.

McMillen’s road to the final round was a tough one, but a challenge that the team was ready for. His day started by knocking off points leader and six time 2017 winner, Steve Torrence with a 3.725, the second quickest of round one. Wins over Doug Kalitta and Lean Pritchett set the scene for the showdown with Brown in the finals.

“We had a fabulous weekend,” McMillen said. “I was the weak link today. Rob Wendland had this hotrod tuned to win. I’m really proud of my team. They worked really hard. We’ve got two new members of the team that are starting to gel with our program and they were a big part of our success today as well.”

While McMillen hasn’t mathematically clinched a spot in the NHRA post-season, but he has virtually stamped his card for The Countdown with five round wins in the past two races.

“We can’t count our chickens just yet,” McMillen said. “But we’re well on our way to meeting one of our goals of making The Countdown. I think we’re peaking at the right time to make a run in The Countdown.”

“Our second goal was to win a race,” McMillen added. ”We were really close today. We’ve got Brainered in two weeks and we can try and earn our way into the TRAXXAS Shootout with a win there and solidify our position in The Countdown. We’re still just a small team with a big dream and we can’t thank all of our partners and fans that have supported and encouraged us to keep chasing this dream.” 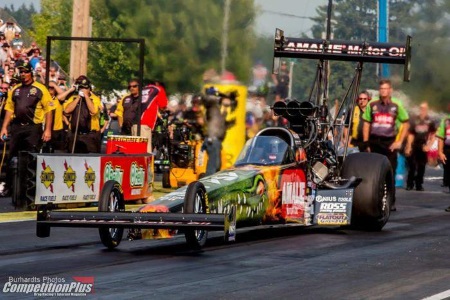