Coughlin started eighth and raced in the top 10 for much of the UNOH 200 before his RIDE TV/JEGS.com Toyota Tundra for ThorSport Racing went to the tight side.

The Delaware, Ohio native was running in the seventh position in the first stage when contact from another truck, as well as a slow leak in the right front tire, caused him to lose seven positions when the stage ended.

A determined Coughlin was able to rebound and fight his way back into the top 10 during the race’s second stage.

During the race’s third stage, the handling on Coughlin’s machine went away. Coughlin fought as hard as he could through the final 80 laps and eventually finished in the 17th position. 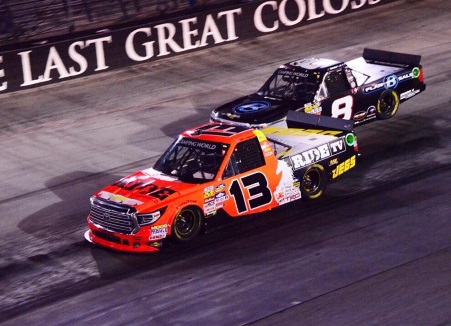 “I thought we had a top 10 finish working during the first half of this race,” said Coughlin. “We battled a lot of adversity through some contact with other competitors and a cut right front tire at the end of the first stage. Near the end of the race the truck just turned terrible. We don’t know what happened, but it wouldn’t turn in the center of the corner. My guys worked real hard and we all deserved a better finish, and we’ll keep fighting to keep knocking off those top 10s.”

Coughlin now has two weeks off before he gets his passport ready to go racing north of the border at the Canadian Tire Motorsports Park in Canada on Labor Day weekend.

For more information on Cody Coughlin and Team JEGS, visit codycoughlin.com and follow Cody on Twitter, @Cody_Coughlin. Follow Team JEGS on Twitter, @TeamJEGS, and “Like”JEGS Performance on Facebook. Follow ThorSport Racing on Twitter, @ThorSportRacing, and visit them online at ThorSport.com. If you need more information regarding ThorSport please contact Kate Fegley via email at kate.fegley@gmail.com. Any other inquiries for Cody Coughlin can be sent to Bob Dillner via email at bd51sports@gmail.com.

Ride Television Network, Inc. is a privately held corporation based in Fort Worth, Texas. The company was formed in 2011 for the purpose of launching a 24-hour, high definition, television network. RIDE TV launched on October 1, 2014 in the United States and is now available internationally. The network features high-quality television programming showcasing both English and Western disciplines and lifestyles and includes live events, reality shows, talk shows, children’s programming, documentaries and more. For more information about RIDE TV, please visit www.ridetv.com.