SPRINGFIELD, Ill., Aug. 22 — Just a week after mentioning he wanted to qualify better, Nolen Racing’s Jerry Coons Jr. topped 32 other competitors to earn his first ProSource Pole Award of the year Saturday in USAC Silver Crown action on the 1-mile dirt oval at the Illinois State Fairgrounds. A little later that afternoon the USAC Triple Crown winner finished a hard-fought fourth in the Bettenhausen 100 for USAC’s top series, which is presented by Traxxas.

With the excellent showing Coons moved from third to second in the series’ point standings with just two races remaining.

Justin Grant started beside Coons’ No. 20 Maxim Tranter Chevy sponsored by KECO Coating and Indy Race Parts, and he won the 100-lap race. Coons almost finished third, but a late-race caution allowed Jeff Swindell to steal the spot on a lap 99 restart, and he was just 0.161 seconds ahead of Coons at the checkered.

Coons’ race was hampered due to contact with a lapped car that caused damage, and was likely the cause of a vibration the car developed.

Coons, a native of Tucson, Ariz., now living in Greencastle, Ind., ran in second place for the first 30 laps. At that point Brian Tyler passed him to push him to third before taking the lead from Grant six laps later. 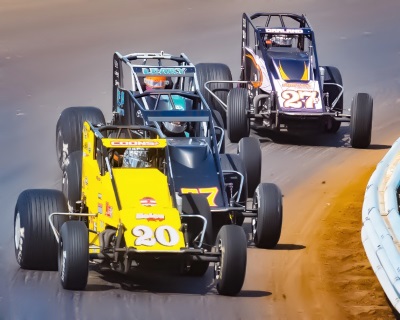 Coons was battling hard for second at the halfway point, as he was just 0.354 behind Grant at the time. The pace slowed for a bit when Patrick Lawson did a 360-degree spin in Turn 2 on lap 51 to bring out a caution, and then a red flew on the restart on lap 56 after Zach Daum hit the inside wall and flipped down the frontstretch and into Turn 1. Reportedly he escaped injury.

Grant retook the lead from Tyler on the restart after the red flag on lap 57 and was never again headed. Coons was still third, just 0.489 behind Tyler after that restart. C.J. Leary was pressuring him hard and was only 0.263 behind him at the time, but a lap later Kody Swanson passed Leary for fourth.

Coons held Swanson off until lap 70, when Swanson got by on the inside in Turn 1. Tyler Courtney was also in the picture then, as he was just 0.191 behind Coons in fifth place.

Swanson passed Tyler for second on lap 75. Coons regained third on lap 83, however, when Tyler stopped in Turn 4 with mechanical difficulties and Korey Weyant’s car had a flat tire, bringing out another yellow.

Courtney faded after that restart, which put Leary back directly behind Coons. They had another great battle, and Coons held Leary off once again until Leary slowed to a halt in Turn 1 to bring out another yellow on lap 96.

That put Swindell in fourth place for the restart on lap 99. He wiggled by on the last lap, but Coons still finished fourth to Grant, Swanson and Swindell. Dave Darland rounded out the top five. The top 16 finishers completed all 100 laps.

All the drivers who finished in the top 10 did a great job of conserving their Hoosier rubber. All but three of them set their fastest laps of the race during the last 10 laps, and none occurred earlier than lap 79. Coons’ fastest race lap was recorded on lap 95 with a time of 31.222, which was the fifth-fastest lap posted during the 100-lapper. He won the pole with a 29.988. USAC officials said it was the first sub-30-second qualifying lap at the Springfield Mile in eight years.

The fourth-place finish in the main event was Coons’ fifth top-five finish in the season’s eight races so far. He advanced from third to second in the overall point standings with just two races remaining: Sept. 3 at the DuQuoin State Fairgrounds in DuQuoin, Ill., and Sept. 23 at Eldora Speedway in Rossburg, Ohio. Swanson leads the point standings with 554 points. Coons has 458 points. Defending champion Chris Windom is currently third with 439. David Byrne is fourth with 372 and Grant rounds out the top five with 360.

Nolen Racing’s Dakota Jackson of Elizabethtown, Ind., was 12th-fastest in practice with a time of 30.874 in the Whiteland, Ind.-based team’s No. 201, a Twister Tranter Chevy which advertises The Cure Starts Now Foundation.

The Rose-Hulman Institute of Technology student cut 0.334 off that in ProSource qualifying and timed seventh fastest with a 30.540, and he was able to start sixth when another driver was penalized. He was running 12th on lap 15 of the race when unfortunately the car’s high-pressure steering line blew, forcing him to stop in Turn 3. He ended up 30th in the final rundown. His best lap was lap 11, when he ran a 32.357.

A third Nolen Racing driver, Hunter Schuerenberg, a native of Sikeston, Mo., now living in New Whiteland, Ind., burned a piston in practice in his Roof Bolt Express/Wesco Trailers Maxim Tranter Chevy, and was unable to compete in qualifying or the race. He was one of seven drivers among the 40 entries who weren’t able to post a time in qualifying.

Jackson and Schuerenberg, who are both rookies in this series, will look for better luck when they join Coons for the last two races of the season.

USAC’s Web site is at USACRacing.com.

Jerry Coons Jr.: “We had a good qualifying run. The car was very good throughout the race. I was just riding, keeping pace with Grant.

“Awhile after the contact with a lapped car, I picked up a very bad vibration through the steering wheel on entry and through the middle [of the turns]. It slowed us down some. We found part of the frame broke where the left-front radius rods bolt on. It was very lucky that it didn’t pull through, or we probably would have had a big crash.”

Gene Nolen (team owner): “There were two things that need to be addressed. First, the starts and restarts must be changed. Second, a car that come out of the pits cannot pass the pace car. You have rules and everyone needs to live by them or they should be changed. I stood on my trailer and watched a car come out of the pits and pass the pace car. Our spotter said most of the other spotters were hollering at A.J. An official said ‘I pushed him out, and he didn’t pass the pace car.’ Why was he given the benefit of doubt? Call things the way they really are.”