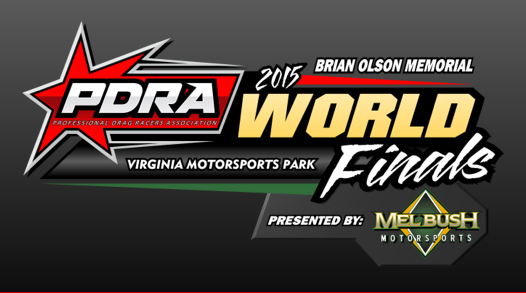 PITTSBORO, N.C. (October 2, 2015): The world’s quickest and fastest eighth-mile drag racing series is coming to Virginia Motorsports Park, October 22-24. The Brian Olson Memorial PDRA World Finals presented by Mel Bush Motorsports is the last event in a year long battle, brought to you at speeds over 200 MPH. Drivers from across the world have fought hard all year to be in Championship contention and a chance at top dog bragging rights. They’ll be laying it all on the line as they vie to be the next World Champion.

In NAS Racing Pro Extreme continual front-runner Jason Scruggs leads the points, and while he’s no stranger to winning, he’s got his work cut out for him in Dubai’s Bader Ahli. Scruggs’ fire-engine red ‘69 Camaro and Ahli’s midnight black ‘69 Camaro will face off to see which is the baddest doorslammer in the country. Switzer Dynamics Pro Nitrous – the class for nitrous breathing machines – also has a tough Championship battle on the line. Multi-time Champion Rickie Smith and nemesis Tommy Franklin have been trading the spotlight all year, but now there’s only four rounds left to see who is the top dog of 2015. Precision Turbo Pro Boost has proven to be one of the most exciting classes of the PDRA and promises to be the class to watch at the World Finals, as less than one round separates points leader Kevin Rivenbark from number two man, Kevin Fiscus.

For those that prefer their speed on two wheels, Drag 965 Pro Extreme Motorcycle brings incredible side-by-side Pro Mod bike action. Back-to-back Champ Eric McKinney has already sealed his 2015 Pro Extreme Motorcycle Championship over Chris Garner-Jones, but would like nothing more than to add one more trophy to his collection.

Two unique classes will also be featured at the World Finals. The Mickey Thompson 10.5 Outlaws and the Toefco PowershieldCoatings.com Pro Open Outlaws live up to their outlaw name with all-out, insane action. All this plus, the Tulsa County Heat Wave Jet Car!

Testing begins on Thursday, October 22 and is open to the public for just $10. Qualifying begins on Friday at 10:30 a.m. with one final round of qualifying on Saturday at 11 a.m. with eliminations following. A complete schedule can be found at www.pdra660.com. Discount tickets are also available online.