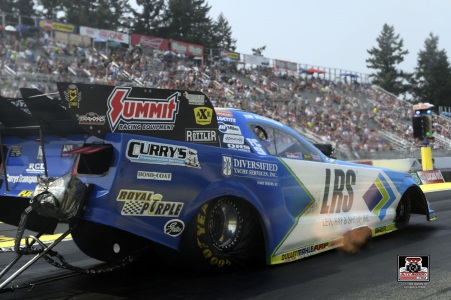 It’s not too late to vote:
Tim Wilkerson counting on fans to show support with Traxxas Shootout vote

SPRINGFIELD, Ill. (Aug. 24, 2017) – Tim Wilkerson and the Levi, Ray & Shoup Ford Shelby Mustang Funny Car team are gearing up for the most prestigious race of the season, NHRA’s historic U.S. Nationals at Lucas Oil Raceway in Indianapolis. In addition to vying for the Indy title, Wilkerson is hoping for a shot at the Traxxas Nitro Shootout trophy and the $100,000 prize.

It isn’t too late to vote, and we need your help.

The special bonus race will take place during qualifying at the U.S. Nationals. Wilkerson has two previous appearances in the event since it became known as the Traxxas Nitro Shootout, and he was runner-up once in the nitro shootout bonus race when it was contested under a different banner, in 2008.

“It would be great to have a chance to win the Traxxas Shootout,” said Wilkerson, who was grateful to receive a large fan vote in 2013 and was fortunate to win the lottery ball drawing. “It’s a real neat deal, and it comes with a big payday that we could really use as an independent team. If you make it to the final in the shootout, you also get to make one more qualifying run. It doesn’t count towards qualifying, but you still learn something – and to us, that is extremely valuable. I’d sure be excited to be involved in the shootout again this year.”

The first seven Funny Car winners of the season are automatically entered in the competition, but the eighth and final position is decided by the process of fan vote and lottery drawing. In order to earn a position in the shootout this year, Wilkerson must first secure as many fan votes as possible. The fan-voting process will determine the number of lottery balls that each eligible driver will be assigned during the Traxxas Shootout lottery drawings. The drawing will take place during a press conference for the U.S. Nationals on August 30th in downtown Indianapolis.

Fans can access the ballot and vote for Wilkerson by clicking here.