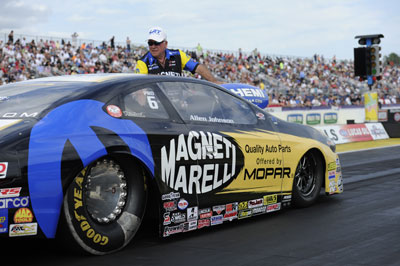 Allen Johnson got the spark he was after by winning the most recent NHRA Mello Yello Drag Racing Series event in Chicago. But if you think that would be enough to satisfy the former Pro Stock world champion, especially heading into one of his most important races of the year, you would be sorely mistaken.

With the Mello Yello Countdown to the Championship approaching and Johnson still eager to get his Mopar Magneti Marelli Dodge Dart in championship form, another prime opportunity to get locked in takes place at this weekend’s 36th annual Mopar Mile-High NHRA Nationals at Bandimere Speedway.

Johnson has been incredibly dominant in Denver, claiming wins the last three years and six of the last eight, and he has no plans to stop that impressive string.

“The timing is perfect for the Mopar Mile-High Nationals event, but we have more hard work to do because we are still not No. 1,” Johnson said. “It gives us momentum and is exciting to see the hard work and perseverance pay off after a challenging start to our year. You know the Western Swing provides a lot of momentum toward the big prize, and the win here at the Mopar Mile-High Nationals could keep that going and be a huge move by our team.”

J.R. Todd (Top Fuel), Robert Hight (Funny Car), and Andrew Hines (Pro Stock Motorcycle) join Johnson as the defending winners of the event. ESPN2 will provide television coverage of qualifying and eliminations at the event. The race begins the legendary three-race Western Swing and marks the 14th of 24 events during the 2015 NHRA Mello Yello Series season.

Johnson’s success at the challenging event has become a remarkable story line and a testament to how seriously he focuses on winning his sponsor’s race. The 2012 world champion and his team have put in considerable work to find a combination that thrives in the high-altitude conditions and unique challenges of Bandimere Speedway. The elevation is more than 5,800 feet at the scenic facility, but Johnson has found a proven method that works, and it is something he takes immense pride in.

“It has been such a blessing to our entire Mopar team, and it is so much fun to have that success,” said Johnson, who has 25 career wins. “It’s great to celebrate that success with the Mopar folks that have been so supportive of our team and of the event for so long.”

Success at Bandimere Speedway is also something Johnson doesn’t take lightly, especially with the tough Pro Stock competition continuing to make strides at the facility. The gap between Johnson and his competitors in Denver has certainly been narrowed in recent years, and he is well aware of the challenges that will be there this weekend.

Four-time world champ and current points leader Greg Anderson, a two-time Denver winner, has had one of the baddest hot rods in the category with four wins on the season. Defending world champ Erica Enders also has four wins this season, and Phoenix winner Rodger Brogdon, rookie Drew Skillman, Houston runner-up Chris McGaha, and Vincent Nobile are all expected to be major contenders in the popular factory hot rod category.

“The last few years, the competition has gotten closer to us, and this year will probably be no different,” Johnson said. “I feel no pressure as I feel we have proven ourselves to Mopar and our sponsors. It’s just a challenge to keep it going. [It’s] a challenge we are certainly up for, and to get ready, we got in some testing last week right after Chicago. You don’t take anything for granted, and a win here is still very hard-fought. To keep the streak going would be amazing because of how difficult it is.”

But Johnson also enters the race with considerably more momentum than he had earlier this season thanks to his victory in Chicago. That bumped him to fifth in points, giving him three final-round appearances in the past five races. Sitting in 10th before that recent stretch, Johnson knew he had to get to work, and that’s precisely what his team has done and continues to do heading into Denver.

“The work to get there comes from lots of dyno testing at the shop and lots of test runs at the track, as well as testing during the races for the Magneti Marelli Dodge Dart,” Johnson said. “It also comes from lots of help from Mopar and Dodge engineers and our employees thinking outside the box and working as a team. The latest success gives me confidence as a driver also. We know we are on the right track, and that is starting to finally show.”

In Pro Stock Motorcycle, the Screamin’ Eagle Vance & Hines Harley-Davidson team has had major success at the track that sits in the foothills of the Rockies and hopes to continue that trend in 2015. Matt Hines, Andrew Hines, and Eddie Krawiec have combined for nine wins on the track. Gainesville and Norwalk winner Karen Stoffer, perennial title contender Hector Arana Jr., who won in Chicago, Atlanta winner Hector Arana Sr., alligator farmer Jerry Savoie, two-time world champ Matt Smith, and many more figure to give their best shot in the two-wheel category.