INDIANAPOLIS — Courtney Force and Terry McMillen secured the No. 8 positions in the NHRA Traxxas Nitro Shootout following a special lottery drawing held today during a press conference in downtown Indianapolis to preview the Chevrolet Performance U.S. Nationals and the lucrative specialty event held during the weekend.

Force, who is the defending Traxxas Nitro Shootout Funny Car winner, has yet to win a race this year but earned the most fan votes with 50 percent and will face top-seeded Ron Capps in the first-round on Sunday. She has raced in the event five times and took home the victory last year as the fifth seed.

“I want to thank the fans because I wouldn’t be able to have this opportunity if not for them,” Force said. “I’m really excited for my team and I can’t wait to get started in the Traxxas Shootout as we try to win this again.” 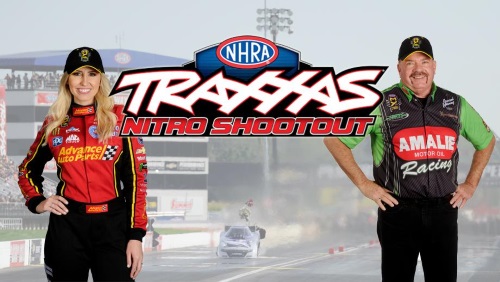 “It’s an unbelievable feeling and I can’t thank all the fans enough who voted for us,” McMillen said. “It’s been a tremendous ride to get into the top 10 and now have the opportunity to race in the Traxxas Nitro Shootout once again.”

The selection of the drivers today was the culmination of a process that started on Aug. 20. All drivers in both categories who had competed in each race this season but were not a part of the seven qualified drivers for each Traxxas Nitro Shootout were eligible for the fan vote/lottery. Fan voting took place on NHRA’s Facebook page and lasted until Aug. 29. The fan voting determined how many lottery balls would be assigned to each driver for the drawing.

Below are the drivers and their first-round pairings for the lucrative bonus races which will award the winning drivers $100,000 each.

Tickets are available for the Chevrolet Performance U.S. Nationals by calling (800) 884-NHRA (6472), or online at www.NHRA.com/tickets.