The conditions awaiting Hector Arana Jr. at this weekend’s 35th annual Mopar Mile-High NHRA Nationals at Bandimere Speedway will be nothing like the one he experienced at the most recent NHRA Mello Yello Drag Racing Series event in Chicago. 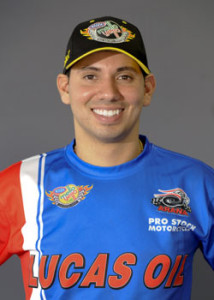 But thanks to that Pro Stock Motorcycle victory at Chicago’s Route 66 Raceway, Arana Jr.’s first of the season, he will take plenty of momentum into one of the most challenging events on the 2015 schedule.

Arana’s set-up on his Lucas Oil Buell will also be entirely different from the last race compared to this weekend but a confident team and rider can make a major difference.

J.R. Todd (Top Fuel), Robert Hight (Funny Car), Allen Johnson (Pro Stock) and Andrew Hines (Pro Stock Motorcycle) are the defending winners of the event, which will be televised by ESPN2. It is the seventh of 16 events during the 2015 Pro Stock Motorcycle season and only three events follow this weekend’s race before the Mello Yello Countdown to the Championship begins.

Currently second in the points standings behind only Eddie Krawiec, Arana Jr. appears to be in championship form after his victory in Chicago, which was No. 10 in his young and successful career. It was also his first since the 2014 race in Chicago, meaning the 10th win was a long time coming.

“It’s really awesome,” Arana Jr. said. “This is my fourth year racing, and to be able to have 10 wins in four years is great. I’m sure there are a lot of people who can’t say that. It’s pretty exciting to have that even number now. Now we’ve just got to go for 11.”

Arana Jr. and his team will certainly be considered one of the favorites in Denver based on how his season has gone. He had already advanced to three semifinal appearances in the first four races, but knocking off two-time world champion Matt Smith in the final round in Chicago provided another major boost to Arana Jr. and his Lucas Oil team. 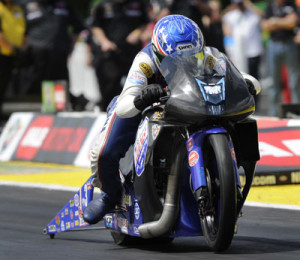 “I needed that win,” said Arana, who also has two No. 1 qualifiers this season. “I felt like I had a lot of pressure built up, and I was finally able to get the monkey off my back. I knew we were going to win, but sometimes, for whatever reason, you push yourself too hard and put too much pressure on yourself. In Chicago I tried to lay back and relax, and it worked. I went back to what I used to always say, ‘One round at a time,’ and it paid off.”

That calm and collected approach could pay dividends down the line as Arana Jr. chases his first world championship. With the Countdown to the Championship playoffs approaching, Arana Jr. knows he must be on top of his game in a talent-filled Pro Stock Motorcycle class.

“All that matters is that we get the bike ready for the Countdown,” Arana Jr. “We got at least one victory this year, and hopefully there’s many more to come.”

To get his second win of 2015 and his first at Bandimere Speedway, Arana Jr. will have to be locked in racing at an altitude of more than 5,800 feet. He must also contend with defending winner and reigning world champion Andrew Hines. Along with Matt Hines and Krawiec, the Screamin’ Eagle Vance & Hines Harley-Davidson team have combined for nine wins on the track.

“Now it’s off to Denver, and we’re going to start with Q1,” said Arana, who was the Denver runner-up in 2013. “We’ve had great success there, and we think we have a good combination for the mountain. I’m looking forward to sealing the deal there because we’ve done really well and reached to the finals before. We just haven’t been able to close the deal, so hopefully this year we can do that.”

No driver has had more recent success at a certain track than Allen Johnson has had at Bandimere Speedway in Pro Stock. Johnson, the 2012 world champ who won recently in Chicago, has claimed the last three in a row and six of the last eight at Denver. Four-time world champ and current points Greg Anderson has had one of the hottest hot rods in the category with four wins on the season. Defending world champ Erica Enders has four wins this season and Phoenix winner Rodger Brogdon, rookie Drew Skillman, Houston runner-up Chris McGaha and Vincent Nobile are all expected to be major contenders in the popular factory hot rod category.