LAS VEGAS—Speed Society, the largest automotive network in the world, has joined forces with the Premier Street Car Association as the presenting sponsor of its biggest event, Street Car Super Nationals 13 Presented by Speed Society Nov. 16-19 at The Strip at Las Vegas Motor Speedway. The partnership brings a strong marketing focus to the event thanks to the nearly 6.5 million Facebook followers Speed Society currently boasts.

Speed Society is made up of real automotive enthusiasts obsessed with the people, culture and the racing lifestyle. Speed Society manages and is partnered with some of the most well known brands and celebrities, both inside and outside the automotive niche. 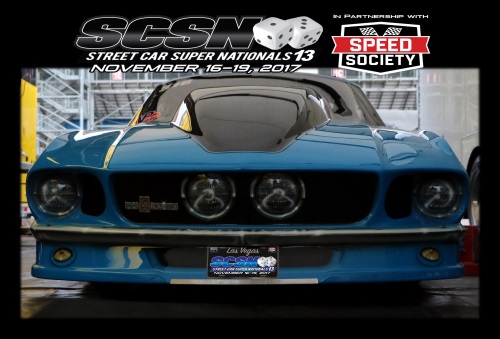 “Speed Society is honored to announce our new partnership with the biggest and baddest!” said Speed Society Chief Operating Officer Doug Del Franco. “The Street Car Super Nationals has a long history of running the best door slammer events in the country. With the big cash payouts and the baddest hot rods on the planet, we are very excited to bring this truly insane event to our fans.”

The 13th running of the granddaddy of them all, the Street Car Super Nationals, returns to The Strip at Las Vegas Motor Speedway Nov. 16-19. For more information, visit StreetCarSuperNationals.com and the official Facebook page HERE.

PSCA STORE: Want to get the best drag racing merch in the business? Want amazing Buy Four, Get One Free specials? Want the chance to win FREE stuff? Visit the store TODAY by clicking HERE.

About the Premier Street Car Association:
In its 18th season, the Premier Street Car Association, based near Denver, has been a staple of doorslammer drag racing since its inception. With six heads-up classes, four bracket classes, and two index classes, the PSCA provides some of the best racing in the country for both fans and racers. The PSCA season is capped off by its Street Car Super Nationals at The Strip at Las Vegas Motor Speedway, now in its 13th year.